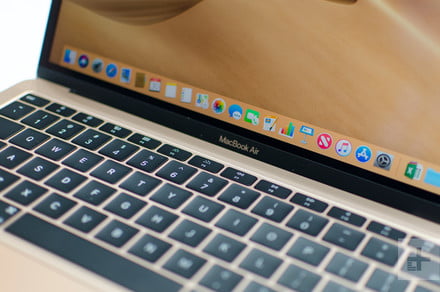 Apple has received a lot of criticism over the past few years not only for its keyboard designs, but for how it’s handled the repairs and warranties related to them. To address the issue, Apple has quietly made it a policy at its stores that if someone comes in with a legitimately faulty keyboard, employees must fix or replace it within 24 hours.

The third-generation butterfly switch keyboards found in Apple’s 2018 MacBook Pro and MacBook Air are slightly better than their predecessors, with an anti-debris coating under the keycaps, but problems with stuck and faulty keys still persist. Apple issued an official apology to MacBook owners earlier this year and now it appears to have taken steps to mitigate the problem at the point of repair.

A leaked internal memo titled, “How to support Mac customers with keyboard-related repairs in store,” charges Apple store employees with prioritizing keyboard repairs to have them turned around by the next working day, as per MacRumors. It makes it policy that all keyboard repairs should be carried out in-store and that additional service parts be shipped to stores to help cope with the increased volume of replacements.

Apple hasn’t made the policy public, although it has addressed the issue with its keyboards previously. Following several class action lawsuits, Apple introduced its Keyboard Service Program, which offered free repairs to MacBook owners who purchased them between 2015 and 2017.

Older MacBooks with first and second-generation butterfly switch keyboards are more prone to errors than the later releases, but all have seen problems with keys sticking or even becoming non-functional altogether. Although following guides like ours on how to clean a laptop keyboard, is a good idea, it does appear that there’s an issue with durability affecting Apple’s main MacBook lines for some users.

If you find yourself unable to use your MacBook because of a faulty keyboard, your best bet now is to get in touch with your local Apple store, or use the official support page to find your nearest Genius Bar location. There you’ll be able to book an appointment to have someone take a look at your keyboard. If this latest memo is anything to go by, they should fix it without delay.