Home How to How to parry your way to perfect grades and quicker takedowns in...
How to 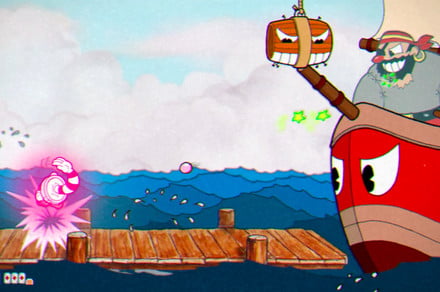 Cuphead gets chaotic. Between multiple enemy phases, a myriad of projectiles and obstacles, and the need to constantly shoot at the big baddie standing before you, it can be hard to remember one of your dude’s integral moves: The parry. Learning how to parry in Cuphead isn’t a challenge itself. You have to do it to complete the tutorial by simply jumping once and pressing the jump button again when aligned with pink objects.

Parrying is an extremely useful tactic in Cuphead that can make sections of boss fights a good bit easier if you keep an eye out for the right opportunities. The technique is also built into the grading system at the end of each level. So, if you want the highest grades, you need to parry. Cuphead has been out for a while on Xbox One and PC, but Nintendo Switch users are now just getting to know the stylish game from StudioMDHR. Our Cuphead parry guide tells you all of the parry opportunities throughout the game, as well as reasons why you should do it as often as possible.

What can you parry?

Each boss in Cuphead has attacks that can be parried. Parrying eliminates that object from the screen, making it easier to dodge the other projectiles flying about the stage. Here are the parry opportunities (they are always pink) for each boss. Parrying works the same when in an airplane, except you don’t have to jump first since you’ll already be airborne.

Right and down vs. left and up

While it’s possible to parry while moving in any direction, parrying while running towards an object to the right is easier to pull off than parrying an object that is moving off the screen to the left. The same goes for parrying down and up. Parrying down is significantly easier to manage than parrying an object that is above you. With some practice, you should be able to parry in all directions, but remember that an unsuccessful parry causes you to lose a hit point. Don’t get greedy if you aren’t confident.

Parrying obviously helps clear up space on the screen, but it also helps fill your super meter far faster than shooting does. By parrying every applicable object, you’ll be able to use more than one Super Art in a battle. That’s extremely beneficial, especially if you’re struggling with finishing off a particularly tricky boss.

You need to parry for A+ grades

You can beat a boss without getting hit and still not get a perfect A+ grade (or S in expert mode). In fact, you might not even get an A from being “perfect.” This is because your grade is affected by multiple stat categories, including parrying. You must parry at least three times to get perfect scores. You also need to use at least six cards (super meter). Since parrying helps fill the super meter, you can see how the technique is a core part of how to play Cuphead as effectively as possible.

Two of the Charms Cuphead can equip impact parries. P. Sugar, which costs four coins, allows you to automatically parry the pink objects simply by touching them. Whetstone, which costs three coins, turns the parry into an attack that deals damage to bosses. Both of these Charms can be quite useful. If you’re having trouble timing your parries, P. Sugar will be a lifesaver. Meanwhile, if you’re a parrying pro who rarely misses opportunities, Whetstone can help you inflict a ton of extra damage. Both of these Charms can be purchased from Porkrind’s Emporium.