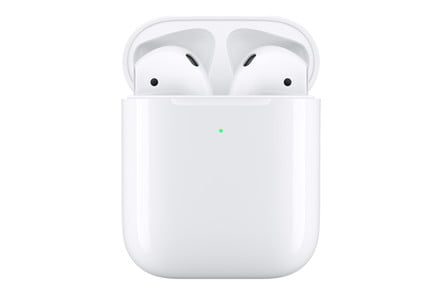 Welcome to the age of incremental updates.

In late 2018, Google gave us an “update” to its HD Chromecast that amounted to little more than a new coat of paint, as well as an excuse to raise the price of its entry-level streamer (which had fallen by $5) back to $35. Months later, following years of speculation about new fitness features, waterproofing, and even health monitoring, Apple has produced a similarly humdrum update to its crazy-popular AirPods that includes none of those rumored features.

The new AirPods’ marquee upgrades are more talk time (three hours instead of two), quicker Siri access, and a wireless charging case (at a $40 surcharge). That’s well and good, but a flurry of other true wireless options packing more features, better battery life, and waterproofing may be enough to push the latest AirPods a few pegs down your shopping list.

One thing that thankfully hasn’t changed with the latest AirPods is their ridiculously easy setup for Apple devices. I left the iPhone behind a year ago for the improved sound and versatility of LG’s V30 (it has a headphone jack!) but I still have my trusty iPhone 6 bumping. I have to admit I marveled at the AirPods’ ease of connection to it. It outdoes every competitor on the market when it comes to simplicity. Just open the case and hold the new AirPods next to your iPhone, and you’re ready to rock. Once paired, they’ll show up automatically on any of your iCloud-connected Apple devices.

For all other phones, you’ll need to force pairing by pressing the tiny button on the back, but it’s still pretty painless. All you have to do is select them from your phone’s Bluetooth settings.

Whether you’re still enamored with Apple’s coveted hardware sparkle or, like me, you’ve become a bit jaded by its iterative design practices, you can’t deny the brand knows how to make a pretty package. Having only tested our aging review AirPods, I was impressed not only with the look and feel of the gleaming white AirPods as I unboxed them, but also how compact that charging case is.

The tiny case claims the same 24 hours of reserve charging it did nearly three years ago. That still beats most competitors. The only visible difference on the new wireless charging case is a transplant of the LED from the backside to front. This allows you to see charging status when the case is placed atop a Qi charging pad.

Unlike Samsung’s new Galaxy Buds, you can’t charge Apple’s case from the back of its corresponding phones. And while Samsung’s cheaper Galaxy Buds offer less charge time on reserve, they best the new AirPods with 6 hours of listening time per charge compared to the same 5 hours Apple boasted in 2016.

The AirPods’ onboard controls are the same as before, which is to say they’re still lacking when it comes to volume and song skipping. Instead of adding touch controls for volume and backward skip like most true wireless buds, Apple employs Siri. The always-on “Hey Siri” feature does make changing volume on your preferred streaming service easy enough — as long as you don’t mind talking to yourself. I was also impressed by Siri’s quick response to my voice commands.

The AirPods’ double-tap for song skip and play can be swapped out for a few other options in the Bluetooth settings, but I’d still prefer a touch response for volume on the golf-tee antenna (see Mobvoi’s Ticpods Free). Like before, the AirPods pause audio quickly when you take one out, and they’ll work with just one earbud if the other happens to run out of juice.

Apple’s new H1 chip promises minor upgrades like lower gaming lag, better call quality in windy environments, and 50 percent faster connection for phone calls. That last one seems hard to quantify in that it’s likely fractions of a second, but I’ll be testing this feature in comparison with the previous generation in the days to come.

As mentioned, there’s no added waterproofing or other sport features as we’d long hoped for, meaning the applications will be limited for workout fanatics, though plenty of people have found the AirPods suitable enough for their daily grind.

Apple’s new AirPods fall into the “Not bad” category with most rivals. If you’ve heard the EarPods, you pretty much know the drill. Attacks of instruments are smoothed over for a soft and pleasant warmth. The midrange and treble are clear, but lack definition or presence. Bass is full and powerful, but not as tight or musical as what you’ll get from a performance-aimed pair of earbuds, leading some instruments to get lost in the mix.

The result is a warm and readily accessible sound designed not so much to please everyone as it is to offend no one. It’s a smart strategy — especially when you’re trying to lasso the most users possible — and seems emblematic of Apple’s overall design strategy as of late.

As previous AirPods users know, the Pods are designed to sit gently in your ear, letting in a fair amount of ambient sound. This lack of intrusion makes them comfortable for long listening periods, similar to what Google aimed for in its Pixel Buds, but with better execution. It’s not great for loud environments, however, and while they’re pretty secure overall, they always feel just shy of falling out.

I haven’t yet had the chance to test call quality or do a full comparison to the previous AirPods for any notable improvements in audio quality.

I’ll need more time with the second-generation AirPods to dig for any revelatory upgrades over their predecessors and primary competitors, but my impression is about what I’d expected. This is a modest update that should please Apple fans new to the true wireless genre, but likely won’t be worth the upgrade for content AirPods owners.