Moto G7 Play vs. Moto G6 Play: Which is your perfect playmate? 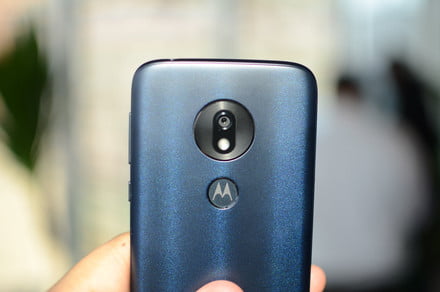 Cheap smartphones aren’t janky, flimsy devices. The best budget phones comprise some of our favorite devices around, and they prove you can get great performance and good looks without paying flagship prices. For budget connoisseurs, Motorola’s G-range has always inhabited a special place — and the Play models are the cheapest of the cheap. The new Moto G7 Play is the latest in this range, and it packs a powerful new processor and a swanky updated design to tempt those who want to spend a little less money.

But if you’re stuck between two phones, which one is better? Do you buy the Moto G7 Play or the older G6 Play? Or if you’re still using your Moto G6 Play, is it worth upgrading to the newer model? We took a look to find out.

Review score
Hands on
3 out of 5 stars

There’s a serious mismatch in pure processing power here. The Moto G6 Play comes with the Snapdragon 427, which provided somewhat sluggish performance in our review. The G7 Play, on the other hand, comes with the much more powerful Snapdragon 632. That’s a big jump, and Motorola boasts it means a 110 percent boost in performance. Despite having slightly less RAM than the top models of the G6 Play, the G7 Play should perform significantly better.

We’re not as certain on battery life. The G7 Play’s 3,000mAh battery, while hefty, is a 25 percent drop compared to the G6 Play’s 4,000mAh battery. We’ll have to test it to be sure, but we think the G6 Play’s two-day battery life gives it the edge over the G7 Play. However, Motorola claims you’ll see 40 hours battery life with the G7 Play, so the difference might not be as big as it seems. The Moto G7 Play also stands out for having a USB-C charging port, which is more universal — meaning there’s less of a need to carry an extra cable around if your laptop has a USB-C charging port as well.

The difference in battery makes it a tougher match, but we think the G7 Play’s performance boost will be more welcome for most.

Each passing year sees small refinements in smartphone design, and the G7 Play is no different. While the G6 Play didn’t have super-chunky bezels around the screen, the G7 Play’s bezels have been reduced even further, giving owners a smaller phone that doesn’t compromise on screen size. The Moto G7 also has a micro-textured resin material on the back, but it decidedly makes the phone feel cheap. You’ll find similar levels of durability here, with polycarbonate bodies that are able to take a blow. A case is always a good idea though, especially to keep water away — neither phone has any water-resistance, though they do have a water-repellent coating to protect from rain and spills.

While design isn’t as big a deal on budget phones, it’s always a nice bonus. The Moto G7 Play is definitely the better-looking of the two phones.

Both of these phones come with a 5.7-inch IPS LCD display, running a 720p HD resolution. But the similarities end there. The Moto G7 Play has a longer screen with a 19:9 aspect ratio and a notch at the top. It’s also slightly sharper thanks to a larger pixels-per-inch measurement — but it’s so slight you’re unlikely to notice.

The difference is likely hardly noticeable between the two, but you are getting a slightly sharper display on the Moto G7 Play.

The camera is traditionally a stumbling block for budget phones, but it’s a hurdle the Moto G6 Play managed to avoid for the most part. The G6 Play provided good enough performance in most situations — though it had more trouble with lower lighting. The G7 Play is packing the same 13-megapixel lens as its predecessor, but the front-facing camera has been upgraded to an 8-megapixel lens. Models of the G6 Play in the U.S. only came with a 5-megapixel lens, while international models came with an 8-megapixel lens — so it’s nice to see this difference disappear in the G7 Play.

While the hardware is much the same, Motorola seems to have tightened up the software. The front-facing camera now comes with portrait mode blur, and the phone will also benefit from an improved 2x digital zoom that aims to sharpen your zoomed images. It’s called High-Res Zoom. These improvements should give the Moto G7 Play the edge over the G6 Play.

The Moto G7 Play runs Android 9.0 Pie, while the G6 Play is currently in the process of being upgraded to Pie, so there’s little to separate the two phones here. Both run an interface that’s close to stock Android and are blighted with little bloatware. However, the Moto G7 Play is guaranteed an eventual Android Q upgrade. While the G6 Play may get a similar upgrade, it’s not guaranteed.

While Motorola doesn’t cram special features into its budget phones, there are a few handy features that improve the user experience. Some of the more notable include the Moto Display, which lets you turn on an always-on display, and Moto Gestures, which uses gestures to control your phone. Some useful gestures include tapping three fingers to take a screenshot, chopping twice to turn on your torch, or twisting twice to open the camera.

If the Moto G7 Play didn’t overpower its predecessor, then it really would have been a waste of everyone’s time. Thankfully, the G7 Play exceeds the G6 Play in pretty much every area, from performance to design, and all the way to the camera’s software. While some of the differences are slight, others should be a fairly large improvement. So if you’re looking to get a new cheap Moto G Play phone, grab the G7 Play. But if you’re already rocking a Moto G6 Play, you shouldn’t feel any pressure to upgrade. The G6 is still a fine phone, and unless it’s really on the ropes, the G7 Play isn’t a reason to upgrade — yet.


Facebook
Twitter
Pinterest
WhatsApp
Previous articleTake $30 off the all-new Kindle Paperwhite on Amazon for Valentine’s Day
Next articleNew York pushes back, so Amazon rethinks its options for a new HQ