HomeNewsScientists debate mysterious flash of light in space, known as ‘The Cow’
News

Scientists debate mysterious flash of light in space, known as ‘The Cow’ 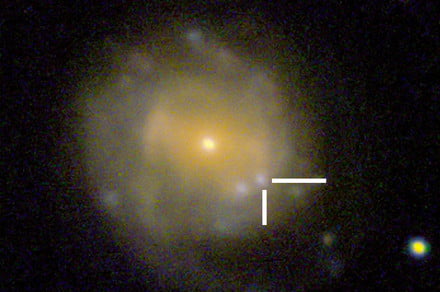 On June 16, 2018 there was an unusual flash in the sky which puzzled astronomers around the world. The flash event was called AT2018cow and has been nicknamed “The Cow,” and scientists have been debating its source since then. NASA researchers have been collecting data on the event using multiple telescopes and now they have shared their findings at a panel session at the 233rd American Astronomical Society meeting in Seattle.

The Cow event lasted three days, during which a sudden burst of light more than ten times brighter than a supernova was observed, then the light gradually faded over the next few months. The event took place in or near to the CGCG 137-068 galaxy, which is located about 200 million light-years away from Earth, and which is a star-forming galaxy. It was first observed using the Asteroid Terrestrial-impact Last Alert System telescope in Hawaii.

AT2018cow erupted in or near a galaxy known as CGCG 137-068, which is located about 200 million light-years away in the constellation Hercules. This zoomed-in image shows the location of the “Cow” in the galaxy. Sloan Digital Sky Survey

NASA scientists investigated the event using the Neil Gehrels Swift Observatory and the Nuclear Spectroscopic Telescope Array (NuSTAR), and they have come up with two competing theories of what caused it.

The first theory is that the flash came from a white dwarf being ripped apart by a black hole, as you can see in a visualization in this video:

A white dwarf could be pulled apart in a “tidal disruption event,” when it passes close enough to a black hole to be affected by its gravity, similar to the way that the Earth’s ocean tides are created by the gravity of the Moon. As the white dwarf is pulled apart into a stream of gas, the tail of the stream is flung out into space while the leading edge circles around the black hole and collides with itself, creating a hot, opaque cloud of material.

The second theory is that the Cow was created by a supernova. When a star dies, it explodes in an event called a supernova and leaves behind either a black hole or very dense core called a neutron star. “Our team used high-energy X-ray data to show that the Cow has characteristics similar to a compact body like a black hole or neutron star consuming material,” Raffaella Margutti, an astrophysicist at Northwestern University in Evanston, Illinois, said in a statement. “But based on what we saw in other wavelengths, we think this was a special case and that we may have observed — for the first time — the creation of a compact body in real time.”

For now, debate will continue over which theory is correct as scientists gather more data.