HomeNewsPrices of some components on the Alienware Area-51m will melt your...
News 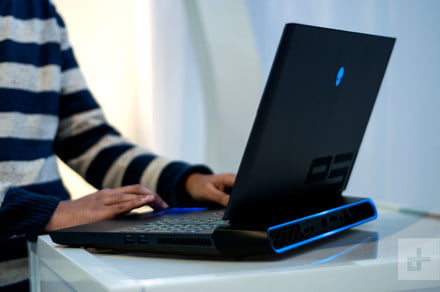 The Alienware Area-51m is a gaming desktop replacement with the ability to change out both the CPU and GPU, but the prices might be too high for consumers. Some of the top-end components for the gaming laptop are expensive, pushing up the final costs for those who are looking to purchase the latest parts and get the best performance out of games.

According to a new configuration page, the fully specced-out Alienware Area-51m with the newest Intel Core i9-9900K desktop processor, Nvidia RTX 2080 graphics, 32GB RAM, and the 144Hz display would come out to $4,250. Fortunately, there is also a lower-end base configuration available, which comes in with a 60Hz display, the 8th-generation Intel Core i7-9700 processor, 8GB RAM, and 1TB (+8GB SSHD) Hybrid Drive. At $2,550, paired with the modularity, this means the end consumer could technically still opt for this base configuration and upgrade later, but there’s a catch. The GPU is proprietary and uses the Dell Graphics Form Factor, and consumers can’t buy their own. Instead, they will have to pay between $400-$450 to Alienware to upgrade the RTX 2070 to an RTX 2080 for more powerful graphics processing.

In our hands-on review of the Alienware Area-51m, the premium comfortable build and design, and powerful desktop-grade processor were big highlights. We also pointed to its high price range and mentioned that cheaper configurations would be coming later. Still, the Alienware Area-51m is packing support for Intel’s Z370 chipset, so any modern processor can be put inside without worry. Other areas of the laptop like the RAM, SSD, and HDD can be upgraded without worrying about proprietary formats.

$4,000 might be a lot to pay for a gaming laptop, but for consumers looking for less expensive options, there were plenty of new offerings revealed at CES 2019. Powered by Nvidia’s latest RTX mobile graphics, and AMD’s Ryzen 3000 mobile processors, there were over 25 different laptops which we found to be the best of CES. These include the affordable Legion Y540 at $930, and the G5 and G7 gaming laptops from Dell. Also announced were new AMD powered laptops from Asus, packing in the latest Ryzen 5 3550H processor, for gamers who are on a budget but still want performance.