HomeNewsIntel vs. AMD at CES 2019: Who came out on top?
News 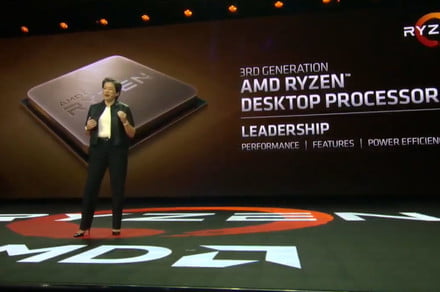 Amid the multitude of companies debuting exciting new technology at CES 2019, there was a deluge of announcements from chip giants Intel and AMD. Those two staunch competitors came out swinging, launching major new product lines, making us hotly excited for what they will deliver over the next 12 months. But, who did it better?

Here’s a breakdown of the two company’s announcements, and who came out on top.

Both Intel and AMD officially announced their long-rumored and hotly anticipated next-generation CPUs at CES this year. Both were big die shrinks that should bring about great gains in efficiency, performance, and features. But there were drastic differences between the pair, most notably in time frame for eventual release.

AMD kicked off its CES 2019 announcements before the show had even started by debuting its very first Ryzen 3000 processors. These mobile APUs are built on the 12nm Zen+ architecture at the core of AMD’s Ryzen 2000 desktop CPUs, paired up with Vega graphics cores on the same die. That should make them capable competitors for Intel’s 9th-generation CPUs in the laptop space.

Those chips are available right now and a number of AMD partners like Acer, Asus, Dell, HP, Huawei, and Samsung, are all set to debut their first products sporting them in Q1 2019. Several were on show at CES itself, including Asus’ Tuf Gaming laptops which included Radeon RX 560X graphics.

As intriguing as the new mobile chips are, the big news on AMD’s CPU front came during CEO Lisa Ku’s keynote address, where she unveiled the first details of the company’s third-generation Ryzen desktop chips. Built using the 7nm Zen 2 “chiplet” approach first unveiled during the announcement of AMD’s second-generation Epyc server CPUs, Ryzen 3000 is a big leap forward in AMD’s processor technology. The early preview tests we were shown of this next-gen hardware hinted at some momentous milestones.

Su showed us a quick game demo where an undisclosed Ryzen 3000 CPU gave plenty of headroom to its next-gen graphics architecture (see below) at 1080P, maintaining 120+ FPS throughout the demo. In a second test, an “eight-core, 16-thread” third-generation Ryzen CPU running at frequencies which were described as “early sample” beat an Intel 9900K in a Cinebench test.

If AMD’s next CPUs can go clock for clock with Intel’s best, 2019 could be the first time in more than a decade that AMD steals the performance crown in the CPU space. Su promised to tell us more in the next few months, leading towards a general Ryzen 3000 desktop release in mid-2019.

Intel isn’t going to roll over though. It had a new, smaller, leaner, and more efficient CPU technology on show this year at CES in the form of Ice Lake. The 10nm CPU line will be Intel’s first die shrink since 2014’s Broadwell and finally lays to rest the idea that Cannon Lake was going to see the light of day.

It’s built on Intel’s Sunny Cove architecture, and though we don’t know how fast it will be, it will be efficient. Intel promised that hardware and software tweaks should give some Sunny Cove based laptops up to 25 hours of battery life, which would compete with some of the notebooks we’ve seen equipped with Qualcomm hardware in recent months. That in itself would be a big change for the industry.

But Intel’s not ready (at least not yet) to claim its hardware will be the most powerful in the world. At a time where AMD is rolling out the red carpet for its new CPUs, that seems rather telling. Ice Lake won’t reach laptops until the end of 2019, with desktop chips coming later, potentially in 2020. If AMD meets its targets, it’ll have the advantage when its desktop hardware releases later this year.

New graphics and no graphics

Where AMD was expected to show off new CPU tech at CES this year, new high-end graphics card technology didn’t make the pre-event rumor mill. But that’s exactly what we got. Sidestepping the hints of a next-gen Navi unveiling, AMD showcased a consumer version of its Vega graphics architecture in the form of Radeon VII.

It’s the world’s first 7nm graphics chip, and AMD made big claims about its performance in new and existing titles. Lisa Su promised 60 compute units and a core clock that could reach 1.8GHz. That’s four less compute units than Vega 64, but a much higher clock speed. The new card will ship out with 16GB of high bandwidth memory too, with as much as a terabyte per second of bandwidth. That’s unprecedented in a consumer card.

In productivity applications, AMD showed internal benchmarks with between 27 and 62 percent improvement for Radeon VII over a Vega 64. It then showed game frame rate tests with a head-to-head comparison with an Nvidia RTX 2080. Results were neck and neck in Battlefield V and FarCry 5 running on DirectX12 and 11, respectively. When using the Vulkan engine, though, AMD claimed a near 15 percent advantage over the 2080 in Strange Brigade.

It doesn’t look like AMD is going to be able to offer competition for Nvidia’s most powerful graphics cards with Radeon VII. It didn’t claim it will tackle the powerful, and expensive, RTX 2080 Ti, or the Titan RTX, but a 2080 competitor is no small step. Lisa Su promised we’d see Radeon VII on shelves and in the first partner systems on February 7. Its price would match that of the third party 2080 at $699.

Intel didn’t have anything quite like that to show us. It’s big graphics card debut isn’t coming until sometime in 2020. It wasn’t entirely silent on the graphics front at CES 2019, but it was in the absence of GPUs that it was most notable.

Alongside a typical expansion of its ninth-generation CPUs in the form of the Core i5-9400, it also announced a new range of chips with a curious “F” moniker. That’s to denote that these chips don’t have Intel’s UHD onboard graphics cores.

The aim of these new chips isn’t entirely obvious as the existing counterparts with onboard graphics are already popular options for gamers and system manufacturers. It could be that shaving off a few dollars from the designs will help Intel’s 9th-generation stay competitive with AMD while we await Ice Lake later in the year. It may also be Intel’s way of taking advantage of the existing stock of 9th-gen parts with faulty graphics cores (turning off the graphics and selling them for less, rather than scrapping the whole chip) to help Intel switch over production to Ice Lake with less risk of 9th-gen shortages.

The first of these new sans-graphics Intel CPUs will be released later this month, with others trickling in before the end of Q2 2019.

Outside of typical new-generation hardware, Intel and AMD both spent some time at CES talking about future projects.  Intel gave a name to the first platform to be built using its Foveros hybrid chip design it announced in December 2018. Lakefield uses the “big, little” concept of chip design that is seen in many mobile devices, combining high-powered CPU cores with low-power CPU cores, offering efficiency and performance when required. Lakefield will have four Atom cores to keep power requirements low, combined with a fifth, larger core for more intensive tasks.

It isn’t likely to be a big initiative. At least not initially. The first device (and it may be singular) to support Lakefield hardware will arrive during the 2019 holiday period alongside Ice Lake, which is built on the same underlying Sunny Cove architecture.

AMD expanded on its graphics announcements by telling us some of the unique places those cards have ended up. The professional versions of its Radeon GPUs have reportedly been powering Google’s gaming servers as part of its Project Stream service. The platform lets you play some of the world’s most advanced AAA games within the Chrome browser. If you do so at some point, know you’ll be effectively gaming on an AMD graphics card.

It’s not a momentous announcement, and was certainly overshadowed by everything else AMD had to talk about at CES, but it was another notch in the belt of a company which after a few years of stagnation and contraction, appears to be firing on all cylinders and competing on all fronts.

Both Intel and AMD showed exciting new hardware at CES 2019, but only one of the two was talking about the upcoming year. Intel’s Ice Lake and Lakefield announcements are all almost a year away from starting to debut as real, viable products. Only its predictable 9th-generation mid-range and entry-level CPUs offered much in the way of near-future hardware.

AMD’s announcements were equally, if not more, exciting. New generation CPUs and GPUs that can compete with some of the best that Intel and Nvidia have to offer, and they’re coming within the next six months — in some cases, weeks. Ryzen mobile APUs are showing up in devices right now and could prove to be fantastically capable for multi-threaded workloads and entry-level gaming at an affordable price.

Radeon VII isn’t quite the Navi announcement we were hoping for, but if 7nm graphics are as exciting as AMD paints it as, the revamped graphics architecture could make AMD competitive with Nvidia at an important price point in the very near future.

As much as we’re intrigued by what Intel had on show at CES this year, AMD’s announcements and real-world performance showcases stole the show, and have us more excited for the year to come.


Facebook
Twitter
Pinterest
WhatsApp
Previous articleThe Honor 10 Lite is proof a cheap phone isn’t the compromise it once was
Next article3 Surprising Stats That Will Make You Open Your Online Store Today!
- Advertisment -