HomeHow toThe best guns in ‘Red Dead Redemption 2’ and where to find...
How to 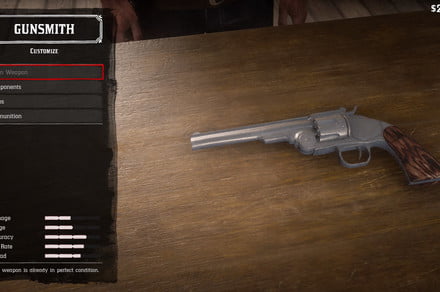 Though Red Dead Redemption 2 is filled with lots of scenic horseback riding, dialogue, and wonderfully rendered cutscenes, you’ll rarely complete a mission without having to fire a gun. At its core, RDR2 is a third-person shooter. With a myriad of guns to carry with you on your journey through America’s heartland, you may be wondering which guns will make the job easier.

In our Red Dead Redemption 2 guns guide, we will outline the best guns available in each class. Keep in mind that each gun has both positives and negatives, and your play style will also dictate how well these picks work for you.

The default weapon type, revolvers are ideal for close to mid-range combat. While there are a few rare revolvers that you can find throughout the world, our two favorites can be bought from gunsmiths.

Though the Schofield Revolver has modest damage and range by default, it can be customized into one of the most well-rounded revolvers you can find, with great damage, range, rate of fire, and reload speed. You can either purchase the Schofield Revolver at a gunsmith for $84 or steal it from the doctor’s office in Valentine.

In order to steal it, you have to first look into the building through the back window. The box on the table in the back room holds the revolver. You can also dual-wield this revolver, which strengthens its versatility even more.

Purchased at a gunsmith as well, the Double-Action Revolver is actually the weakest in the class at first. Through customization, however, you can turn it into a powerful revolver with the best combination of rate of fire and reload speed in the game.

We generally prefer revolvers over pistols in Red Dead Redemption 2, but one pistol is definitely worth grabbing and customizing.

You can buy the Semi-automatic pistol at the gunsmith in Saint Denis and Valentine.

To our knowledge, only three repeaters exist in Red Dead Redemption 2. While we could clump repeaters in with standard rifles, they offer closer to an “automatic” firing mechanism than your standard rifle. So it’s beneficial to have both a standard rifle and a repeater with you.

The carbine repeater may feel inaccurate at first, but if you customize it, its range gets much better. Combine that with great damage and reload speed (and decent rate of fire) and you have a great gun for both gunfights and hunting. You get the carbine repeater very early in the story.

In this section, we’re covering standard rifles, not snipers. This leaves you with the Bolt Action Rifle and Varmint Rifle. It’s an easy choice.

In terms of mid to long rang e weapons, you’d be hard pressed to find a more versatile weapon than the Bolt Action rifle. When fully upgraded, it has the best possible range in the game (with an added scope), along with a fairly good reload speed and close-to-max damage. It’s not ideal for close range due to its low rate of fire, but it’s great for tense duck-and-cover shootouts.

Arthur gets the Bolt Action Rifle in a chapter three mission.

You could argue that the Bolt Action Rifle serves as a solid enough long range rifle already, but if you’re looking for a traditional sniper, designed purely for picking off enemies from a distance, there is a better option.

Acquired from a gunsmith, the Springfield Rifle has the highest damage of a starting sniper rifle and great range. When upgraded, it has maximum damage and maximum range. No matter how much you upgrade it, though, it still won’t have a good rate of fire or reload speed. It’s important to know that the Springfield Rifle, like other traditional snipers, is only advisable to use in long range situations.

The Springfield Rifle can be bought from gunsmiths.

The ultimate close range weapon, shotguns can blow away enemies with one devastating blast. Any shotgun can get you great results from close-range, but we have two favorites.

The Double-Barreled Shotgun can be bought from gunsmiths.

While it deals slightly less damage than the Double-Barreled Shotgun, the Semi-auto has significantly faster reload speed, making it especially good if you sometimes get a little reckless and trigger happy.

The Semi-auto Shotgun can be bought from gunsmiths.