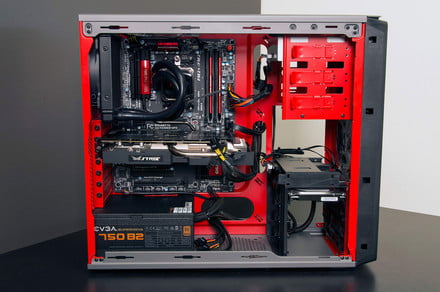 Who says 4K gaming has to be expensive? Well, it isn’t cheap, but if you’re willing to do the building yourself, you can make a perfectly capable 4K gaming PC for less than $1,000 and we’re here to show you how. We’ve scoured the digital bargain bins and crunched the numbers to put together what we think is a powerful gaming PC for under $1,000 that will be able to handle 4K.

If you’d rather buy a pre-built system though, check out our guide to the best gaming PCs you can buy right now.

The build and what it can do

We’ll go into more detail about the different components we’ve chosen below, but here’s a quick summary of the parts we’ve picked.

Note: All of the products listed below are purchasable from Amazon and were found on the site as part of our research. It’s worth double checking prices before you buy as they do change regularly. When you’ve got your new components in hand, be sure to read our guide on how to get started building your own PC. You’ll also need a 4K monitor if you don’t already have one.

Looking at the above list of hardware might leave you wondering why there are so many budget components listed. After all, this is a 4K gaming rig, surely we should have a super-powered CPU and boat loads of storage space too? Actually, when it comes to 4K gaming, the most important component is the graphics card and everything else, even the CPU, isn’t going to hold it back unless you’re aiming for high frame rates too — which for a budget build, we’re not.

This system is not going to play all the latest AAA games at 4K and Ultra detail settings at 100 FPS. That’s not what we’re targeting. We’re looking at more mid-range settings at the 30 to 60 FPS mark, all at crisp 4K resolution.

As much as 4K gaming is cheaper today than it has been in the past, there is only so much we can get for $1,000. If you don’t need to be quite as strict as us, though, we’ll provide additional options in each category where you can splash a bit more cash for an improved experience.

Arguably the best bang-for-buck gaming processor in the world right now, the AMD Ryzen 2600 gives you six cores, 12 threads, and a standard boost clock of up to 3.9GHz across all cores. It also comes with its own cooler, helping us keep costs down and though it is on the weak side compared to the powerful GPU we’re pairing it with, it won’t hold anything back at 4K with the kind of frame rates we’re targeting.

If you have a bit more money to spend, we’d probably opt for an aftermarket cooler before upgrading the CPU, to keep things nice and quiet. If you want more power, a 2600X will give you a couple of hundred extra megahertz, or another $100 or so will get you a 2700X, a more powerful CPU with more cores and threads for greater multi-tasking. If you’d rather go Intel, a Core i5-8400 is a comparable purchase if you can find it at a decent price. If you do go down that route though, make sure you opt for a compatible motherboard (the one below won’t work with an Intel CPU).

ASRock’s B450M Pro4 is one of the best motherboards built on the B450 chipset platform. They feature a pair of PCIexpress x16 slots that offer support for twin graphics cards with AMD Crossfire, as well as 7.1 surround sound audio and memory speeds up to DDR4 3200MHz. It’s not as capable at overclocking as some of the full size alternatives, but it’s VRM is solid, and it features load line calibration (LLC). That’ll help you achieve more stable overclocks under heavy load.

It’s in the mATX form factor so is a little cheaper thanks to its size, but there are some alternatives at a similar price if you’d rather opt for another brand.

By far the most important component in any 4K gaming rig, the graphics card does the bulk of the heavy lifting and is the most expensive part because of it. AMD cards aren’t often talked about in the same breath as 4K, but the Vega 56 is perfectly capable of handling entry-level 4K gaming at reasonable detail levels. You can’t expect the frame rates you would see with a Vega 64, or even one of the newer-generation Nvidia RTX cards, but it will absolutely be capable of 4K resolution in almost all games if you’re willing to compromise on some settings.

In AAA games of a few years past it might even be able to handle Ultra settings too. In something newer like Assassin’s Creed: Odyssey, you’ll likely need to turn a few down to keep yourself between 30 and 60 FPS without stuttering.

When it comes to gaming in 4K, you can’t really spend too much on your graphics card, so if you are happy to go beyond the $1,000 budget we’ve set ourselves, buying a better graphics card will improve your performance in games dramatically.

As much as most gaming PCs might get away with 8GB of RAM, our 4K gaming rig could struggle with less than 16GB, so we found the most affordable dual-stick 16GB kit we could find.

We could save a little money by going single module — providing an easier upgrade path in the future — but dual channel has its benefits. There are faster kits out there which would benefit our set up, as Ryzen CPUs tend to like faster memory. If you have a little more to spend, something like this 3,000MHz G.Skil Ripjaws kit can be had for around $25 more.

The storage is arguably the weakest part of this build, and we’d love something bigger and faster, but we’re on a tight budget. While 120GB isn’t going to be enough for your operating system and more than a game or two, since this is an AMD platform, we’re going to take advantage of AMD’s StoreMI technology. That lets you turn any two drives (typically an SSD and HDD) into a single storage solution — as far as Windows is concerned. That way you get the best of both worlds. A fast, larger storage drive. In our case, 1.1 terabytes of space, with speeds comparable to that of an entry-level SSD.

If you can get away with less storage, a few dollars more can have you this 512GB SSD from Crucial.

Adata on Amazon Seagate on Amazon

For $40, you aren’t going to find a better case than the MasterBox Q300L. Somehow Cooler Master has created a case with a side panel, and dust filters for $40 that actually looks good.

We don’t know how it’s done it, but it has. This mATX case is perfect for our budget 4K gaming rig.

It might be tempting to scrimp on your PSU, but you shouldn’t do it. If it blows up because it’s made with cheap components, it could take the rest of your PC with it.

That’s why we’ve opted for an acceptably powerful, safe and certified, Cooler Master MWE 600w model. It’s more than enough power for the PC we’re building and it has a decent efficiency rating too.


Facebook
Twitter
Pinterest
WhatsApp
Previous articleHow to sell your iPhone 7, iPhone 8, or iPhone X (without getting ripped off)
Next articleGoogle Play is offering discounts on apps, games, movies, and more
- Advertisment -