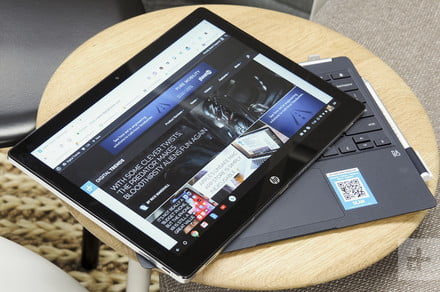 After a couple of years during which Chrome OS powered mostly low-priced notebooks and the occasional premium 2-in-1, things are starting to look up for Chromebook buyers. A new wave of laptops is arriving over the next several months that promise to be more well-made, innovative, and powerful.

HP has kicked off this new wave with the first Chrome OS tablet that’s not aimed at the education market, and the company obviously designed it to compete with the Chromebook blue blood. That means that HP’s $580 Chromebook x2 takes on Google’s high-end Pixelbook that starts at around $750 on sale. Does the Chromebook x2 has a chance against its entrenched and well-connected competition?

The Chromebook x2 certainly looks and feels the part of a genuine challenger to the Pixelbook. It’s well-built, with its all-metal tablet portion giving off that “solid chunk of metal and glass” feeling that exudes quality. It also has a forward-thinking design, with a keyboard base that the tablet magnetically snaps into and creates a traditional clamshell notebook that’s stable in the lap.

HP also gave the Chromebook x2 some great aesthetics, with the back of the tablet sporting a “ceramic white” color scheme that’s, in fact, an anodized electrodeposition (AED) coating promising to help the tablet stay scratch-free and lovely. The tablet mates with a keyboard base that’s also attractive, with a rubberized surface that looks good and feels great.

The Google Pixelbook also aims for a premium look and feel. It’s blend of metal, plastic, and glass that stands out as well thanks to a design that essentially mimics the company’s Pixel smartphones. The same sort of glass cutout adorns the upper quarter of the chassis’ backside, identifying the Pixelbook as a member of Google’s lineup while simultaneously improving wireless connectivity.

Both 2-in-1s sport bezels that are a little larger than usual, which should make each more comfortable to hold onto in tablet mode. They both also have great keyboards and touchpads for traditional input and control, along with responsive touch displays and active pens.

Frankly, if they both cost the same, we’d call this category a draw. But the Chromebook x2 makes its elegance and robust build available for significantly less money.

The Chromebook x2 is equipped with a 7th-generation low-power Intel Core m3-7Y30 CPU, 4GB of RAM, and 32GB of eMMC storage. Those components are plenty fast for Chrome OS, which is a relatively lightweight OS that doesn’t put the same demand on the processor, RAM, or storage (thanks to the integrated Google Drive cloud service) as Windows 10. During our review testing, we found the Chromebook x2 to handle whatever we asked of it with alacrity, whether that was running Chrome, Chrome OS apps, or Android apps.

The Pixelbook is even more powerful, with low-power 7th-generation Intel Core i5 and i7 CPUs, up to 16GB of RAM, and up to 512GB of very fast NVMe solid-state drives (SSD) storage. That’s fast enough for Windows 10, and handles Chrome OS like a walk in the park.

Both of the notebooks enjoy 12.3-inch IPS displays running at 2,400 x 1,600 (235 PPI) resolution in the 3:2 productivity-friendly aspect ratio. Both displays are bright, offer excellent contrast and colors, and are joys to use for both working and consuming media.

The Chromebook x2 is plenty fast for Chrome OS, but the Pixelbook is faster, hands-down. Google stacked the deck when it comes to performance, and there isn’t a Chromebook out yet that can keep up.

The Chromebook x2 packs in 48 watt-hours of battery life, which isn’t a lot for a traditional notebook but it’s at the high end for a tablet. It lasted a solid four hours and 23 minutes on our aggressive Basemark web benchmark battery test, an excellent score the promises all-day battery life. It’s also thin and light as just a tablet at 0.33 inches and 1.62 pounds, although weight jumps to 3.07 pounds with the keyboard attached (it’s a bit heavy, to balance the display in clamshell mode).

The Pixelbook has a smaller 41 watt-hour battery, which nevertheless managed to power the 2-in-1 for a very good four hours and 1o minutes in our Basemark test. That’s only slightly behind the Chromebook x2, and the Pixelbook also ran for a full workday and then some. The Pixelbook is 0.40 inches thick and weighs 2.4 pounds, meaning it’s easier to carry around than the HP unless you leave the latter’s keyboard behind.

The Chromebook x2 and Pixelbook are both highly portable 2-in-1s that can last a long time without being plugged in. We give the nod to the HP, though, because it’s just much more comfortable to use as a slate — particularly if you want to use the pen to draw or take notes.

The cheaper HP Chromebook x2 has the edge

We had some difficulty ranking either of these high-quality and good looking Chrome OS 2-in-1s higher than the other, except in terms of performance. There, the Pixelbook was faster, but the Chromebook x2 was no slouch either. Chrome OS doesn’t ask as much of its hardware as Windows 10 or MacOS, and the Pixelbook’s edge is mostly theoretical at this point.

But the Chromebook x2 beats the Pixelbook in one crucial area: Price. At $580 with the keyboard and pen included, the HP is significantly less expensive than the Pixelbook’s starting retail price of $1,000 (although it’s often on sale for as low as $750). We can’t say with confidence that there’s a compelling reason to spend more when the Chromebook x2 is likely to meet just about any Chrome OS user’s needs.