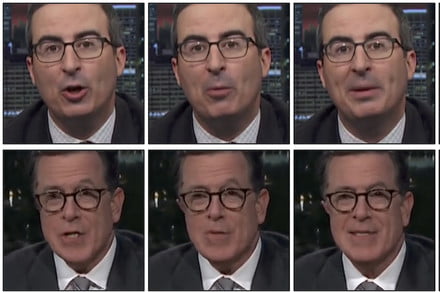 A team of researchers at Carnegie Mellon University have developed an artificial intelligence system that automatically transfers content from one film into the style of another. In the vein of “deep fakes”, the A.I.-augmented videos infamous for superimposing one person’s face onto another’s body, the CMU system presents another case for how difficult it could be to distinguish fiction from reality in the future.

The CMU researches have named their system Recycle-GAN, after a class of algorithms that help make deep fakes possible by applying the style of one image or video to another.

In a video released early this month, the researchers demonstrated how a source video of Barack Obama speaking can be processed to make it seem as though Donald Trump is mouthing the word. Or a monologue from John Oliver can be transformed into one from Stephen Colbert. Recycle-GAN isn’t limited to human faces either. The researchers also show how the system can make a daffodil bloom with the same mechanics as a hibiscus.

The end result isn’t perfect — a slew of digital artifacts around the edges of the edited faces make it clear that things aren’t exactly as they seem. Still, it’s pretty impressive.

Bansal said he was motivated to develop Recycle-GAN by an urge to, in a sense, resurrect the dead. “One of my life goals is to bring back … Charlie Chaplin in our movies,” he said. As such, Bansal sees the system as a tool for artists, such as moviemakers, and data-hungry researchers.

“Our approach enables generation of data which could be used to train a simple machine learning model that can discriminate between real and fake,” he said. “Generating this fake data was hard earlier because most deep fakes out there require human intervention or manual supervision, and as such we could never get an automatic way to detect them. However, now we have an automatic way to generate such data that we can train models that could detect fake content with some reliable accuracy.”

Bansal presented his team’s work at the European Conference on Computer Vision in Germany earlier this month.


Facebook
Twitter
Pinterest
WhatsApp
Previous articleAmazfit Bip review: A $79 smartwatch that does it all
Next articleUK Deal: Save £30 on AncestyDNA’s genetic testing kit today only
- Advertisment -