HomeNewsPhilips claims a ‘world’s first’ with a 4K HDR display for PC...
News 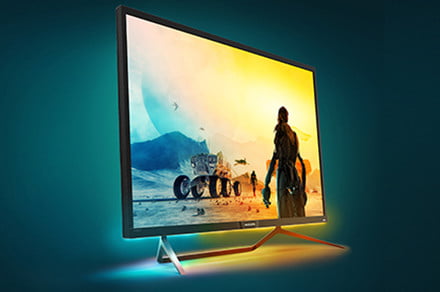 Envision Peripherals is gearing up to launch the world’s first desktop monitor with the coveted VESA DisplayHDR 1000 certification. Marketed as the Philips Momentum 436M (436M6VBPAB), the monitor will pack a 43-inch screen with a 3,840 x 2,160 resolution when it ships later this summer for $999.

Enter DisplayHDR, a new system created by VESA to classify HDR-compatible desktop monitors so customers can better understand the visual range of the display in regard to contrast and color accuracy. There are three certified labels: 400 for entry-level HDR displays, 600 for midrange HDR fidelity, and 1,000 for enthusiasts.

The details regarding the upcoming Philips Momentum 436M are rather slim right now, but we do know the display is based on quantum dot technology. That means it relies on nano-sized semiconductor crystals that generate pure, monochromatic blue, green, and red light. They also provide a higher peak brightness than your typical pixel on an LCD screen.

That’s also where the new DislpayHDR numbering system comes into play. Displays that fall under the DisplayHDR 400 umbrella have a peak brightness of 400 nits. Likewise, DisplayHDR 600 is for panels capable of 600 nits, and DisplayHDR 1000 is for the high-end displays that can crank the brightness up to a crazy 1,000 nits. Meanwhile, your typical desktop monitor is around 300 to 350 nits.

The Philips Momentum 436M6 promises “a wider range of more accurate colors – especially dark reds and greens – that stay crisp and clear even in bright light.” It’s backed by the company’s Ambiglow technology that generates a “halo” of light outside the screen. This tech presents the illusion of a larger screen by processing each flashed image and matching the outer glow colors with those displayed on the screen. Users can manually adjust the external lighting as well.

At this time, we don’t have a full specifications list, including the panel’s port complement. But according to the company, the Philips Momentum 436M6 will include MultiView technology, enabling customers to view two connected devices simultaneously, such as a desktop and a laptop, or a set-top-box and a gaming console. Based on those descriptions, the panel should have at least two HDMI inputs.

We should hear more about the Philips Momentum 436M in the coming months.