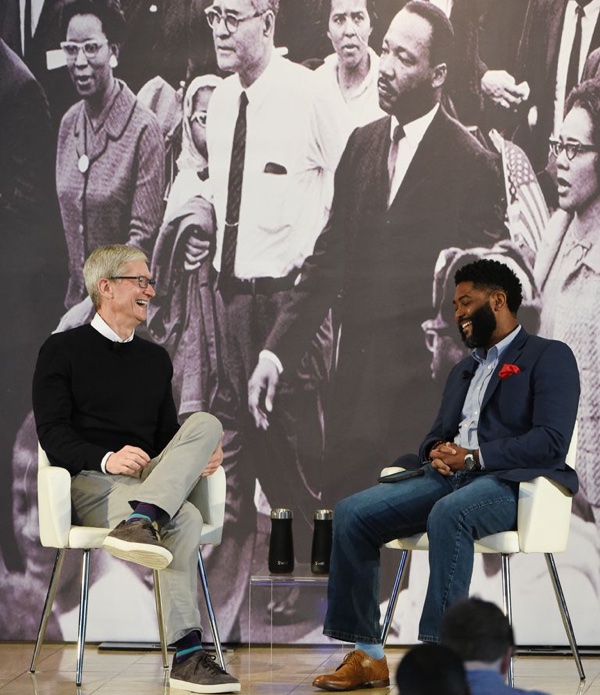 Apple CEO Tim Cook visited Alabama today to attend a banquet hosted by the Birmingham Metro Southern Christian Leadership Conference (SCLC), where he received the 2018 Human Rights Award for advocacy for equality and safety in the workplace. Cook is an Alabama native who grew up in Robertsdale and attended Auburn University.

The event was meant to commemorate the 50th anniversary of Dr. Martin Luther King Jr.’s assassination. King was the founding president of the SCLC in 1957.

It’s an honor to be in Birmingham celebrating Dr. King’s life today. “Let us all hope that…in some not too distant tomorrow the radiant stars of love and brotherhood will shine over our great nation with all their scintillating beauty.” pic.twitter.com/GN6T54hSqx

Ahead of the banquet, Cook also spoke at a student symposium at the Sixth Avenue Baptist Church in Birmingham focusing on civil rights, education, and innovation, and details of what he had to say were shared by Alabama news site AL.com.

On the topic of Martin Luther King Jr., Cook said his teachings “are timeless.” “If you listen to him today, you feel like he is speaking about today,” said Cook. He went on to explain that it’s important to reflect on the work done by King, and the ways we can continue his legacy.

Full of hope this morning, hearing from hundreds of Alabama students who are carrying Dr. King’s legacy into the future. pic.twitter.com/NDPimMl10A

As for students who attended the symposium, Cook encouraged them to “change the status quo” with a quote from Dr. King: “It’s not the behavior and the actions of evil people that we remember at the end, but the silence of the good people.” Cook said that’s a quote that has always resonated with him.

“It is a special time in your life,” he said. “This is a period of time where you can change the status quo. Now is the time to do it. The world needs you more than ever to not be silent.”

After Dr. King, the conversation shifted to coding. As Cook has said multiple times, he believes coding is an “essential language.” Apple’s Swift coding curriculum is rolling out in community colleges in Alabama as of today, and Cook’s trip also involved a stop at the Lawson State Community College.

Great visit @LawsonStateCC. Alabama’s @ACCS_Education is the first to roll out the Swift Coding Curriculum statewide, and students here are learning new skills to show the world what’s possible. pic.twitter.com/3HQKuOOeGr

Cook told students at the symposium that everyone in school should have “multiple years” of coding before graduating because it’s important to “understand the possibility of software” even for those who don’t plan to pursue a computer science-related job.

He also said that with students in the U.S. being pushed into four-year colleges, vocational paths have dried up, leading to the need for a rebalancing. Not everyone needs to attend a four-year college, he reportedly said, and focusing so much on four-year colleges has left us without enough people with the skills to build things.

Cook’s final words were to encourage students to fight for change. Young people are “not stuck with old dogmas” and don’t accept “it’s never been done before” or “it can’t be done,” he said. “This is a great beauty of being young,” he told students.

All of Cook’s comments and additional details on the symposium can be found over at AL.com.

Tag: Tim Cook
Discuss this article in our forums