HomeNewsWhat is an SSD? The ultimate explanation of the solid-state drive
News

What is an SSD? The ultimate explanation of the solid-state drive 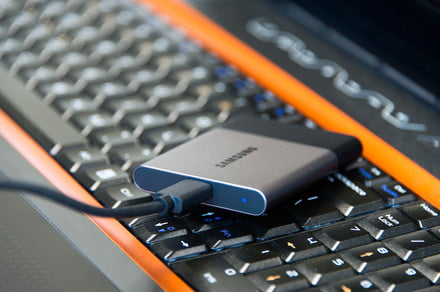 The solid-state drive is a famous data storage option for your devices. But if you’re shopping for a new device or storage upgrade, you probably want the details. What is an SSD, really, and how is it different from the storage options that came before? We’re here to break it down!

Let’s start with a quick comparison. The older HDD-style drives offer “nonvolatile” storage based on physical forces – movement and magnetism. They are literal disks that spin around and write code into a magnetic coating that preserves the data. They remained popular for so long because they were safe, easy to use, and no one could come up with anything better…until the SSD, or solid-state drive, emerged.

The solid-state drive uses flash memory, which has been around for many years. Instead of depending on physically “writing” data on a disk, flash memory uses memory chips (typically NAND-style chips). In these chips, semiconductors flip arrays into different states of electric charge to store code. Since nothing moves but the electrical patterns, the storage drive is “solid state.”

Even before SSDs became common, we were using flash memory on thumbdrives and similar devices, but early versions of flash memory weren’t quick, and were expensive to make it large capacities. Even modern solid state storage, which relies on the newer NAND flash chips, remains much more expensive than a disk drive at any given capacity — but costs have come down enough to be competitive.

Since most computers now come with SSDs, they have to better than old HDDs, right? In many ways, yes. Here are the benefits that led to their dominance.

No moving parts: The big problem with moving parts is that they always, always wear out in the end (and sometimes unexpectedly in the beginning). Product designers try to get rid of moving parts whenever possible because of how easily they can be damaged. Solid state drives have their own lifespan limitations, but they’re generally more durable and reliable because there’s no moving parts to damage and no drive motor to break.

Speed: Electricity moves quickly. SSDs can write or read data at incredible speeds compared to HDDs—and at a fraction of the power, which means less heat buildup, too. There are also speed benefits related to a lack of fragmentation, and other solid state qualities.

Mobility: SSDs are smaller and lighter than previous drives. This makes it possible to create today’s ultra-thin laptops, tablets, and other mobile devices. The thinnest devices are putting solid state storage right onto the motherboard. That means upgrading is out of the question, but it help laptops, smartphones, and tablets reach their razer-thin profiles.

Low failure rates: Despite early concerns, SSDs malfunction less often than HDDs. This is do to widespread material improvements and features like like ECC, or error-correcting code, that keep SSDs on the right path.

Size and Design: SSDs can come in many different shapes and sizes, depending on how many chips they have and how those chips are arranged. This makes them much more versatile than alternatives.

Longer lifespan: Every SSD has a lifespan that’s limited by wear on the drive’s ability to properly store the electrical charges sent to it. Luckily, the lifespan of most drives can be measured in decades — at least under normal use. Research has shown that not only do SSDs last longer than HDD counterparts, but they also last longer than experts expected.

There are a couple ways to classify SSDs, but we’re going to mention a particularly important factor—the type of connection they use. Connections can broadly be divided into a few different options.

SATA III: This is the final evolution of an older connection option that works with both HDD and SSD. It was very useful during the transition from HDD to SSD. Now that this transition is slowly coming to an end, SATA III connections (which can handle a maximum bandwidth of about 600 megabytes per second) are losing favor.

PCIe: The Peripheral Component Interconnect Express option connects to PCIe lanes in motherboards for a more direct flow of data. Because of this they are speedy, supporting SSD writing speeds around 1GB per second. However, they are currently quite expensive, guaranteed to raise the price of a computer.

NVMe: NVMe or Non-Volatile Memory Express is designed to augment PCIe connections so they are more versatile, easier to upgrade, and generally even faster. NVMe is currently even newer than direct PCIe connections, and so even more expensive, but look for this spec to become common in coming years.

The future of SSDs

Currently HDDs are still used for very large data storage projects, and will probably always have a place as niche storage that doesn’t depend on electrical states, but they will grow increasingly rare. SSDs are becoming common even in budget-oriented systems. We recommend that anyone buying a new laptop or desktop purchase one with an SSD.

As for storage tech beyond SSD, nothing is viable yet. There is some work on unique conductor arrangements like Intel’s Xpoint, and the hopeful possibility of quantum storage sometime in the future, but the SSD holds the throne for now.