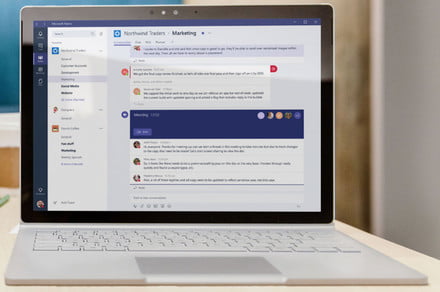 The latest developer preview of Microsoft Teams reveals that the company’s Skype for Business replacement will likely eventually offer a free version for customers who don’t have an Office 365 subscription. References to the free version reside at several places within the client-side code, but so far there is no indication of all the limits Microsoft plans to implement for non-subscribers.

The endgame is fairly obvious: Get everyone off competing service Slack and onto Microsoft Teams. The idea is to reel in potential customers with a free service and hook them to the point of unlocking the full platform using an Office 365 subscription. Slack does something similar although customers aren’t buying into a full suite of Office applications.

For instance, Microsoft Teams may restrict file sizes with its free tier, requiring an Office 365 subscription if users want to send files over a specific size to fellow team members. Microsoft may also limit team sizes, the number of supported teams, and how long messages remain in the chat history. Connections to bots and third-party services may also be disabled.

According to reports, lines of code in the latest developer preview point to a storage limitation in the unannounced free tier. Examples include “freemium_storage_exceeded_dialog_upgrade” and “Admin action to upgrade to paid version.” In other words, once your saved files hit a specific storage limit, the client will throw up a warning to upgrade if you require additional space.

By comparison, the free version of Slack provides a single 5GB capacity shared by all team members. To get additional space, companies can pay $6.67 per user to assign 10GB of personal space for that specific team member. For $12.50 per month per user, that team member gets 20GB of personal storage. Slack’s freemium tier is essentially an unlimited trial, and Microsoft Teams is apparently taking the same route.

Microsoft’s team-based collaboration client first appeared as Office Communicator in 2007 followed by the next-generation Lync 2010 client in 2011. By 2015, Microsoft decided to cram together its Lync and Skype products to release Skype for Business. Microsoft replaced this service with Microsoft Teams in September.

Microsoft considered purchasing Slack in 2016 for around $8 billion after Slack introduced new video and voice services. But Microsoft CEO Satya Nadella and co-founder Bill Gates weren’t really keen on the idea, leaning more on beefing up Skype for Business rather than shelling out billions for a third-party service. Enter Microsoft Teams and a roadmap that promises to bring more Skype for Business capabilities to the newer platform.

The big problem Microsoft Teams faces right now is its inability to support Microsoft Account owners that do not subscribe to Office 365. They are likely using Slack’s free service, but that could change in the near future given the information pulled from the latest developer preview is in the platform’s future.