The Moto Smart Speaker adds a little Alexa to your smartphone 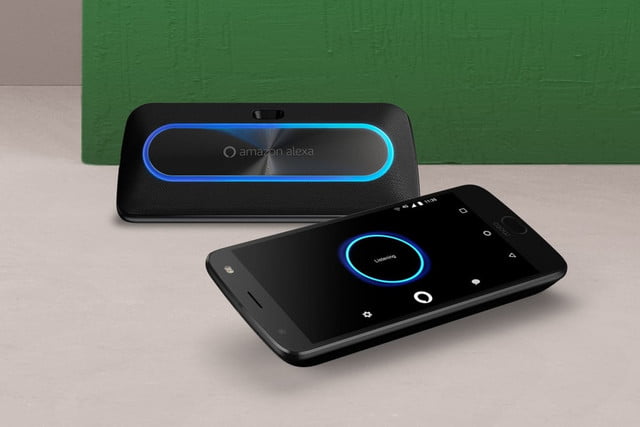 If you’ve got a Moto Z series phone and desperately want Alexa, Lenovo’s new Smart Speaker might be the answer.

Radios. Robots. Home intercoms. It’s hard to find something that doesn’t have Alexa, these days, and Lenovo’s new smartphone accessory is a prime example.

The metal-and-plastic Moto Smart Speaker is designed to work with Lenovo’s Moto Mods system, the magnetic connectors on the back of the Moto Z2 Force and Moto Z Force. That is apparent from its design — if you’ve ever used a clip-on external phone battery, you have a pretty good idea of what the 168-gram, 153.2 x 73.2 x 22.8-millimeter speaker looks like.

But the Smart Speaker has what most add-ons don’t: A splashproof body that doubles as a charging stand, two 8-watt speakers that deliver stereo sound up to 82 decibels, and four far-field microphones pick up voice commands from across the room. An integrated 1,530mAh battery supplies the thing with up to 15 hours of battery life, and an oval-shaped ring around in the center lights up when Alexa recognizes a command.

Here’s how it works: When you pair the Smart Speaker with a compatible smartphone, a companion app launches on the screen. After you follow a brief series of step-by-step instructions, that is it — Alexa is at your fingertips.

If you see Alexa in action on Lenovo’s Moto X4, the Moto Smart Speaker’s implementation won’t take much getting used to. Amazon’s assistant responds to “Alexa” commands about to-do lists, the calendar, weather forecasts, and music controls even when the phone’s locked. That information is beamed to the Moto X4’s screen, where you can dismiss it, take action on it, or save it for later.

Just like Alexa on other devices, the Smart Speaker can control smart home appliances from GE, Belkin, Samsung, and hundreds of others. And it supports Alexa’s more than 15,000 third-party apps (skills) in Amazon’s growing library. You will find food-ordering skills from Domino’s and Grubhub, to name a few, plus ridesharing skills from Lyft and Uber, travel-planning apps skills Kayak and Expedia, and more.

The Lenovo Smart Speaker will retail for $150 in the U.S. when it begins shipping in November. If you’re planning on importing it from another country, be forewarned that Alexa only works in the Germany and the U.K.

The Smart Speaker is not an affordable proposition by any stretch, considering Amazon’s refreshed Echo Dot speaker starts at $50. But for Moto Z-touting Amazon enthusiasts who want one-tap Alexa access everywhere they go, there is no better solution.