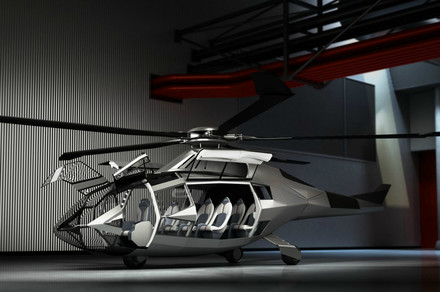 Your idea of helicopters could start changing very soon.

Helicopters are getting safer, smarter, and more efficient. Bell Helicopter recently showed images of the FCX-001, a helicopter concept that incorporates new and emerging technologies in aircraft design, according to a Bell announcement.

Standout design attributes in the FCX-001 included a rotor-less tail boom, hybrid propulsion systems, new airframe composition materials, variable cabin layouts, and modified landing gear. The helicopter’s rotor blades will be able to morph to accommodate varied needs and both the pilot and the passengers in the cabin will make extensive use of augmented reality. If you picture a helicopter with lots of windows, no tail rotor, and no dashboard for the single pilot you’ll be on track with the more visible changes.

Bell tasked a collaborative group of problem solvers, consisting of engineers and graphic designers, with creating the FCX-001 concept.

“For the past 80 years, Bell Helicopter has imagined the art of the possible and brought those dreams to life,” said Bell Helicopter President and CEO Mitch Snyder. “Six months ago we created a dedicated team to focus on emerging technologies and how we could incorporate them into our products. Among that team’s first tasks was to display visually the technologies and innovations that present a roadmap that we envision bringing to market.”

The FCX-001’s propulsion system combines a thermal engine core for the primary propulsion with electric motors to power an anti-torque tail boom system. Basically, the heat transfer engine drives the helicopter and the electric motors keep it from spinning in the opposite direction of the main rotor blades. Those main blades have modules on their tips that change to improve performance in different conditions.

The helicopter airframe, meaning the body and structural components not counting the engines, will be made from sustainable materials. The design and engineering goals for the airframe include strength, visibility, and room. The structure will incorporate technologies to harvest, store, and distribute energy — think harvesting solar and wind energy while moving through the sky.

In the absence of a physical dashboard, the FCX-001 pilot will use augmented reality with artificial intelligence to control the aircraft. Passengers will have the ability to access the same augmented reality tech to hold video conferences, check the news, share documents, or stretch back and watch a movie.

The new-tech Bell FCX-001 helicopter concept isn’t quite as far-reaching as Wonder Woman’s invisible jet, but it comes close.

Facebook
Twitter
Pinterest
WhatsApp
Previous articleClose to the Metal Ep. 37: Does the Windows 10 Creators Update live up to its name?
Next articleApple patent points to a Touch Bar for the next Magic Keyboard

You should hold off on buying an SSD for PS5. Here’s why!

Best answer: No. Sony has not stated which internal SSDs will be compatible just yet and the PS5 does not
Read more

The FCC has a new Acting Chairperson, Jessica Rosenworcel, and reviews are in for Samsung's Galaxy S21 Ultra. As well,
Read more