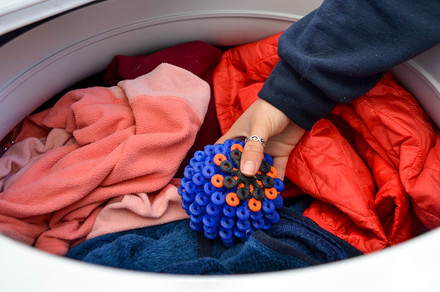 At any given moment, there are approximately a zillion crowdfunding campaigns on the web. Take a stroll through Kickstarter or Indiegogo and you’ll find no shortage of weird, useless, and downright stupid projects out there — alongside some real gems. In this column, we cut through all the worthless wearables and Oculus Rift ripoffs to round up the week’s most unusual, ambitious, and exciting projects. But don’t grab your wallet just yet. Keep in mind that any crowdfunded project can fail — even the most well-intentioned. Do your homework before cutting a check for the gadget of your dreams.

Laundry machines, like most of the convenient things we take for granted in this modern world, aren’t all that great for the environment. As it turns out, when you wash your clothes, tiny little fibers (known as micro fibers) are shed from your garments and mix in with the wash water.

After this water is pumped out of your washing machine and funneled away from your house, it eventually makes its way out to the open ocean. These microscopic fibers are then ingested by marine animals like fish and crustaceans. Because we eat these animals, we ultimately end up eating the microfibers that we unknowingly flushed out to sea.

Scientists have only recently begun to see the effects of this problem. Microfibers, and the chemicals they’re made of, are now so prevalent in our oceans and marine life that they’re beginning to have a noticeable effect on human health.

But that’s not to say that there isn’t anything we can do about it. This new gizmo, called the Cora Ball, is designed specifically to capture microfibers in your washing machine and prevent them from making their way into our waterways. All you need to do is toss it in with your next load and hit start — the ball takes over from there.