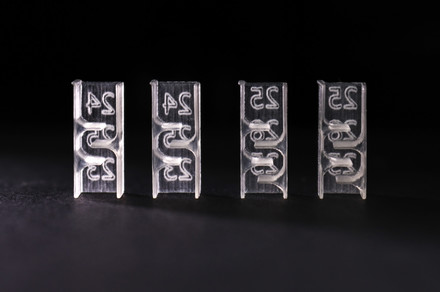 If refined, this technology might one day allow doctors to use targeted ultrasound to destroy cancer cells

Scientists in the United Kingdom have developed a super material that allows anyone using it to focus sound waves in a way that’s no tougher than rearranging Lego blocks.

Using a grid of 16 3D-printed metamaterial bricks, the researchers showed that sound waves can be transformed into different sound fields. The results can be used for a broad range of applications, from directing complex multisource sound fields that you would normally need multiple speakers to achieve, to focusing sound waves so tightly that it can levitate a polystyrene bead.

“It’s a bit like Scrabble pieces which you can assemble into different orders to create different words,” Professor Sriram Subramanian, head of the Interact Lab at the University of Sussex, told Digital Trends.

More: This amazing sound lab can replicate the acoustics of any building that exists … or doesn’t

In another simile, Subramanian said the work was an attempt to do with sound what LCD displays do with light.

“Looking at an LCD display, you might be forgiven for thinking that there many light sources behind it,” he continued. “In fact, there’s just one light source. But we don’t do sound the same way. To create a complex sound field, you have to have thousands of sound sources. We’re trying to do is to change that — and make sound manipulation similar to light manipulation.”

The research was published this week in the journal Nature Communications, which explains how the metamaterials can be made and used.

It’s still early stages, but the work has a broad range of potentially exciting applications. These could include obviously sound-based use-cases like directing sound so that it can only be heard in one specific hotspot, or to follow a person as they move. Another use-case might be in haptic technology. It could even be used in a medical context, with high-intensity ultrasound waves used to target tumors in the body.

Some of these are “much further down the line” than others, but there’s no doubting that this is work that Subramanian and his colleagues at the University of Sussex and University of Bristol will be building on in the months and years to come.

That noise you hear is the sound of progress being made!