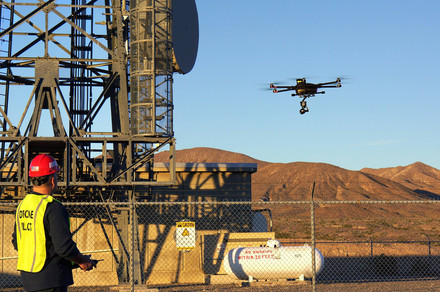 Yuneec’s Hollywood-grade quadcopter is getting an upgrade with refined controls and flight patterns. The Yuneec Tornado H920 Plus, a hexacopter nicknamed the Tornado, is a professional-grade drone with a modular design adaptable to cinematography as well as other commercial applications.

More: Fun, fast and nearly crash proof, the DJI Phantom 4 is all we’ve ever wanted in a drone

With the H920, pilots can now save settings as well as choose from a number of different “mission” modes. Using the control system, pilots can plot out a path ahead of time using a map with waypoints, or pinpoint a more exact route by drawing out the route with what Yuneec calls the Curved Cable Cam. The Tornado’s new flight patterns also include Orbit Me, which circles the operator while keeping the camera fixed on them, as well as the Point of Interest mode, selecting a different subject to circle around.

The new autonomous flight patterns are joined by Yuneec’s manual control set, as well as the manufacturer’s standard safety features including geo-fencing and a low-battery-return-home feature. A team flying mode also lets a piot direct the drone’s path, while a photographer focuses on the footage.

The drone is paired with a new camera, the CG04, developed in collaboration with Panasonic. The camera boasts a 16-megapixel, four- thirds sensor with 4K videos and compatibility with four different Olympus lenses. The drone can also carry earlier CGO camera models, including a thermal camera.

The Tornado even includes a three-axis gimbal dubbed the ProAction Grip. Like the GoPro Karma’s gimbal, it’s removable for using the camera and stabilization system from the ground.

Despite being a larger, commercial grade drone, the Tornado’s six arms fold for easier transport. The drone’s landing car retracts in mid-air, for unobstructed camera views.

As a professional-grade model, the Tornado joins the likes of the company’s H520, with a similar price point. The drone, already available for purchase, lists between $2,499 to $3,999 depending on the add-ons bundled with the drone. The CG04 camera and ProAction gimbal will also sell separately for $1,500.