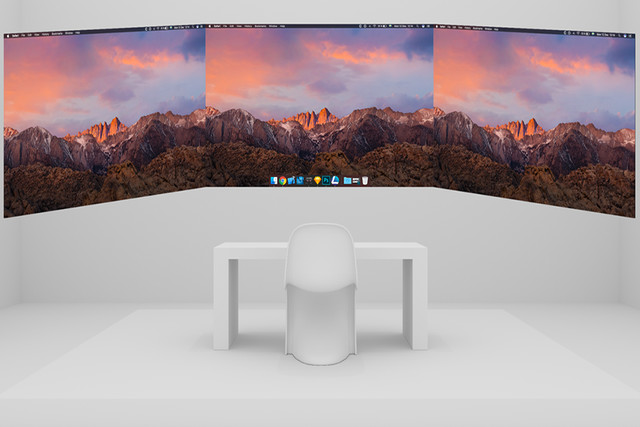 While the Oculus Rift VR headset is not supported on MacOS, this new app provides a workaround for “modern” MacOS devices.

Developer Cindori released a MacOS app called VR Desktop for the Oculus Rift virtual reality headset. This app creates a virtual multi-monitor workspace for machines running MacOS 10.11 or higher that is viewed specifically through the Oculus Rift Development Kit v2. A version for the retail release of Facebook’s VR headset isn’t expected to arrive until later in 2017.

Costing $20, the new app enables Mac owners to strap on the Oculus Rift and view their MacOS desktop across up to three virtual displays. The catch is that the app will work on “modern” Macs that include discrete graphics chips. That is quite an amazing feat given the Oculus Rift isn’t officially supported on Mac machines.

Why? Because Macs typically don’t have the graphics chip component required to run the Rift. For example, the 21.5-inch iMac relies on Intel’s integrated graphics while the 27-inch models have an AMD Radeon R9 M300 Series component, which isn’t advertised as VR-ready. The latest MacBook Pros rely on integrated graphics as well and the expensive cylinder-shaped Mac Pro desktops sport dual AMD FirePro D-Series graphics chips, which don’t meet the Rift’s requirements either.

But it seems that Cindori is working around the current limitations. The company said it created a custom “state-of-the-art VR framework” promising a smooth experience on recent Macs with a discrete graphics chip. That rules out all models that rely solely on integrated Intel graphics.

The actual hardware requirements to run the app are unknown. However, here are the minimum and recommended specs needed to use the Oculus Rift:

Oculus VR placed its plans to support MacOS and Linux on hold a while ago. Oculus VR founder Palmer Luckey said in March 2016 that Oculus would resume its efforts to support MacOS again when Apple releases “a good computer.” He clarified by adding that Apple may release a $6,000 Mac Pro with the top of the line AMD FirePro D700 discrete graphics chip but it still doesn’t meet the Rift’s requirements.

“It just boils down to the fact that Apple doesn’t prioritize high-end GPUs,” he said. “If they prioritize higher-end GPUs like they used to for a while back in the day, we’d love to support Mac. But right now, there’s just not a single machine out there that supports it.”

For now, it seems, VR can be enabled on modern Macs with discrete graphics through the new app. Users can play games, watch movies, work on spreadsheets, and more in a VR environment. Support for the HTC Vive headset is planned for sometime in 2017.