HomeNewsThe Nexus workbench packs all the features a tinkerer could ever dream...
News 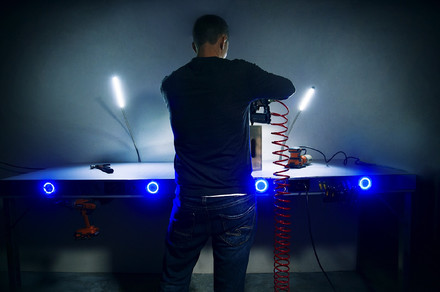 If you’re a home tinkerer with limited space to work, the Nexus workbench may be the high-tech answer to your prayers.

Are you a maker, tinkerer or some other word that ends in “er,” who requires a garage workstation to do your thing?

Do you occasionally look at existing workbenches and find yourself wishing they would borrow a bit more of their design language from the 1982 movie Tron?

If you answered yes to both of these questions, you will probably fall head over heels in love with the Nexus workbench, a new Kickstarter project which launched on Tuesday.

“The Nexus workbench is a game-changer for the home garage, solving these problems with unique storing capabilities and a plethora of features,” Zeb Fish, founder and CEO of Garage Mastermind, told Digital Trends. “Using linear actuators, the Nexus effortlessly transforms from its generous 3-foot by 8-foot workspace position into its storage position, sitting less than six inches from the wall. This means when you’re not working on a project, you can tuck the Nexus out of the way with just the flip of a switch.”

Of course, the foldaway element is not the only exciting aspect of the Nexus. As well as space issues, most garages also lack adequate lighting and electrical outlets — which is where the workbench’s bright LED lights on its flex arms come into play. There are also eight integrated electrical outlets and the same number of USB charging ports, so you can charge batteries, power devices, and run your assorted power tools without having to stop to switch cords.

In addition, you get a ton of other nifty features — ranging from magnetic trays and a T-track accessory system for holding tools to integrated Bluetooth stereo and hands-free calling, a laser-etched ruler, and more.

In terms of pricing, the workbench will set you back $899 for the basic model, while the fully kitted-out Nexus Complete — with airgun hook, rifle mount, fly-tying mount, bike vise, magnifying lens, and tablet stand — adds $100  on top of that. Shipping is scheduled for October.

We guess that leaves you with around eight months to figure out what you will build with it.