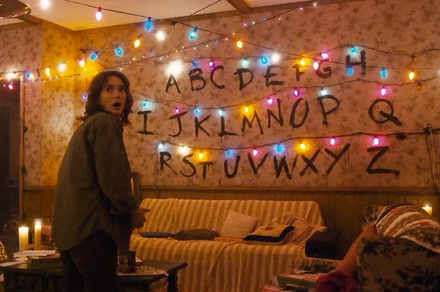 Netflix has actively encouraged fans and enthusiasts to hack their products and try to improve them with events like the Winter Hack Day. The resulting creations could end up serving as a proving ground for new features.

Everyone loves Stranger Things, right? Well, in case you’re tired of binge watching the first season over and over while waiting for season two, Netflix has a little surprise for you. First unveiled during the Netflix Hack Day on January 30, a Stranger Things-themed retro-browser game from creator Joey Cato is now available.

The game allows players to revisit scenes from Stranger Things and play Atari-style versions of Frogger and Pac-Man that have been revamped to feature characters from the popular Netflix series. For instance, you can dodge vans as Eleven, or try to rescue kids from the Upside Down without being caught by the Demogorgon.

Because you play the games on TV screens placed in screen grabs from the show itself, it’s a bit of a rough experience. Some screens are awkwardly placed, and make for a very difficult playing experience. Still, it’s worth checking out, particularly if you have a couple minutes on hand and you want to experience a period-accurate game based on one of the hottest shows of 2016.

The Netflix Hack Day also featured another Stranger Things-themed project, a lighting system built into a Christmas sweater. The sweater imitates the famous Christmas-light alphabet wall from the series that was used as a way to communicate with the displaced Will Byers.

Similarly, the hack day featured other Netflix-inspired projects like a mind-controlled interface, and a picture-in-picture prototype that allows you to see which friends are watching the same shows. Another project shown off at the hack day was a plugin that would allow you to donate to relevant causes after watching a socially conscious movie, like a documentary film, or TV series.

Stranger Things made a splash in early 2016, capitalizing on ’80s nostalgia by sending up and subverting some popular film tropes from that era. Rather than simply imitate sci-fi and kids-in-peril films, Stranger Things creators, the Duffer Brothers, created a modern story using familiar components that felt fresh and familiar all at once.