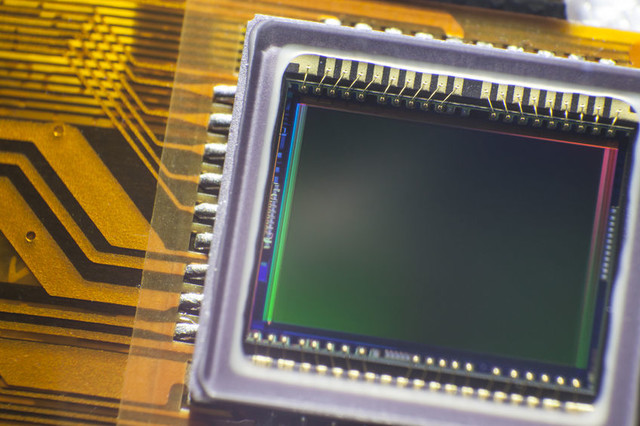 With applications in security and science, the new sensor avoids the loss of resolution suffered by traditional visible+NIR cameras.

Panasonic has been working on organic imaging sensors for a few years now, but its latest design goes beyond full-color imaging to offer near-infrared (NIR) sensitivity suitable for night vision. Whereas normal visible+NIR cameras sacrifice some spatial resolution in order to serve double duty in both daylight and night vision, Panasonic’s new design avoids this by using two stacked layers of organic photoconductive film (OPF), one for the visible spectrum and one for NIR light. 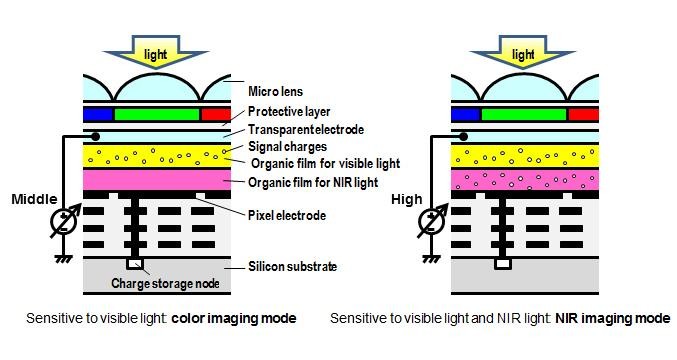 By controlling the voltage to the OPFs, it is possible to switch between visible or visible+NIR sensitivity. The voltage is distributed unequally between the OPFs, so that the visible light layer on top always receives a greater amount than the NIR layer below. At low voltage, both layers are inactive, while at medium voltage just the visible layer is active. At high voltage, both layers are active.

More: The speedy stacked sensor of the Sony RX100 IV could be coming to smartphones

Compared to a traditional CMOS imager, an organic sensor captures more light and separates the photoelectric conversion and circuit readout stages of digital imaging, enabling a true global shutter. The sensor can also hold more information at each pixel location which leads to a claimed 3 EV improvement in dynamic range.

While this technology, in general, holds a lot of promise for all aspects of digital imaging, Panasonic’s visible+NIR version of the sensor probably won’t ever be found in the company’s photography or filmmaking products. Instead, it is likely destined for use in security cameras or scientific equipment. The ability to switch between visible and visible+NIR imaging at a frame-by-frame basis, potentially at very high frame rates, could be beneficial for machine learning, object recognition, and motion analysis.

Because the OPF layers themselves are designed for sensitivity to specific wavelengths of light, the system does not require an IR cut filter employed by typical digital cameras. This minimizes the space required, which could potentially make the technology viable for consumer smart home cameras in the future.

In watchOS 7, Family Setup is a new feature that allows kids, elderly relatives, and others to take advantage of
Read more