Home News Florida woman says exploding iPhone woke her up in the middle of...
News 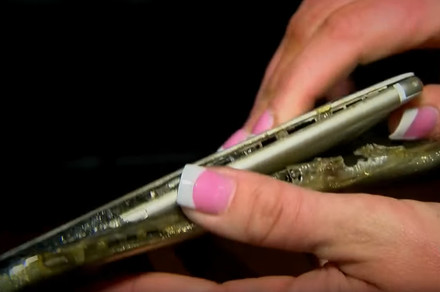 No mobile device is completely free from the danger of overheating or even exploding, and safe battery design is becoming increasingly important.

A Palm Harbor, Florida woman is looking for answers after her iPhone 6 Plus exploded at her bedside while charging in the middle of the night, according to a recent report out of NBC affiliate WFLA.

Amanda Bentz says she was awakened at 3 a.m. when her smartphone went up in flames right next to her face, depositing soot all over the nightstand and singeing her pillow case, bedspread, and curtains. Bentz says her husband, Kyle, quickly smothered the “fireworks” with a T-shirt — rendering her iPhone a smoldering pile of aluminum and melted plastic.

More: Everything we know about Samsung’s Galaxy Note 7 recall

Thankfully, that was the only damage.

“If he wouldn’t have woken up right then and there,” Bentz said, “and like immediately came to and put it out, it would have caught the curtain on fire, and then the bed.”

An Apple spokesman thanked WFLA and Bentz for bringing the issue to their attention, and stated the company is investigating the matter. Apple has offered Bentz a replacement 6 Plus, putting a $749 hold on her credit card worth the full cost of a new device, which the company says it will return when she sends the burned iPhone back.

News of iPhones exploding is rare, though some unsubstantiated reports have cropped up since Samsung recalled its Galaxy Note 7 for similar reasons, citing malfunctioning battery components and manufacturing errors as the culprits. The South Korean company launched a monthslong internal probe to determine precisely why its flagship device was overheating and, in some cases, bursting into flames.

Samsung tested 200,000 devices and reported it was able to reproduce the problems observed in consumer devices. Since then, it has pledged to implement an eight-point battery inspection process for future products, including the upcoming Galaxy S8.

While all devices containing lithium ion batteries technically pose the risk of what experts call a “thermal runaway” — the exponential, uncontrollable buildup of heat that can occur, for example, when the negative and positive electrodes of a battery come into physical contact with one and another — manufacturers can mitigate that risk with careful design and testing, as well as emerging technologies, like equipping batteries with flame-retardant chemicals.

The never-ending demand for mobile devices that are simultaneously smaller and smarter has placed a burden on power consumption, causing manufacturers to fill every millimeter of available space with batteries — which is potentially putting customers’ safety in jeopardy, and making quality assurance more important than ever before.