Home News Are your headphones always running out of juice? This charging case can...
News

Are your headphones always running out of juice? This charging case can help 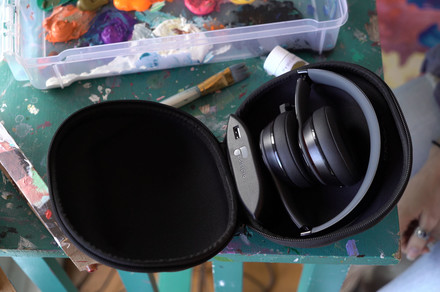 Your constantly power-draining wireless headphones might have just met their new best friend.

If you’re familiar with PolarPro, it’s a safe bet that you’re a photographer or videographer, as the company is mainly known for its lens filters. Now, though, the company is tackling a new challenge with the WAVe, a case for your wireless headphones that charges them while keeping them safe.

We’ve seen cases that charge headphones before, but they’re usually included with true wireless earbuds, or when they are offered by third parties, they focus on in-ears. The PolarPro WAVe, on the other hand, can hold models like the Bose QuietComfort and Beats Solo series. The case is quite the looker as well, with an exterior coated in Napa leather.

The case is available in two different models: the WAVe Contoured and the WAVe Universal. The Contoured model fits the Beats Solo, Solo2, Solo3, and Beats Studio Wireless, while the Universal model fits the Bose QC25, QC35, and SoundLink headphones. Other headphones will likely fit as well, though you may not want to back the Kickstarter unless you’re absolutely sure yours will fit.

No matter which model you opt for, PolarPro says the built-in 3,000mAh battery can fully charge the headphones up to 10 times, depending on the model. Charge time will depend on the model, but according to the company, many headphones can be charged to 90 percent in 20 minutes, and can achieve a 100-percent charge in 30 minutes. The case itself can be recharged in a little under three hours. In addition to charging headphones, an external USB port allows the WAVe to charge mobile devices as well.

Either case is available for a pledge of $40, while Super Early Bird pricing — which is still available — will get you either case for $30. If you want to go all-in, a three-pack is available for $100, allowing you to mix and match Universal and Contoured designs.

The campaign, which launched yesterday, is aiming for $55,000 in funding, If successful, PolarPro expects to start shipping to backers in May 2017. For more information or to back the campaign, see the WAVe Kickstarter page.