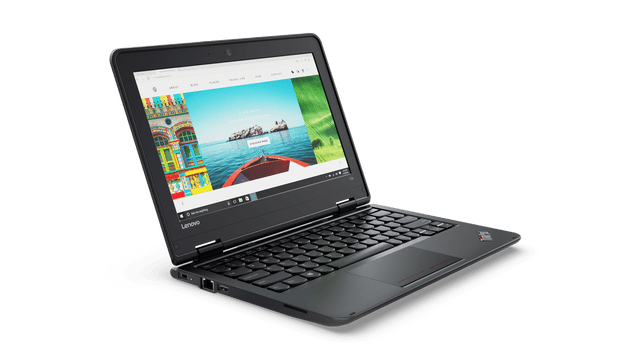 Students and schools may want to see what Lenovo’s new Chromebooks and Windows 10-based notebooks bring next month.

During the BETT 2017 convention in London, Lenovo revealed its latest products for the educational market that included updated ThinkPad 11e and ThinkPad 11e Yoga laptops. Both are part of Microsoft’s new “Intune for Education” program aimed to push Windows 10 into the educational system and seemingly target the low-priced Chromebook market. However, Lenovo knows many of its customers love Chrome OS, and plans to ship Chromebook versions of these two models as well.

But that’s not all. Lenovo also plans to introduce the Lenovo N23 Chromebook next month followed by the Lenovo N23 Yoga Chromebook in April, and then the Lenovo N24 laptop later this year. However, as shown in the table below, Lenovo’s new Chromebooks targeting the educational sector will still be a cheaper option than the Windows 10 units on the pricing front. Whether or not that rumored Windows 10 licensing fee reduction applied to these laptops is unknown for now.

Despite the announcement, Lenovo didn’t provide any hardware details regarding the upcoming laptops, nor have the units appeared on the company’s website. All we currently have to go on is a general list of features for each until the products show up online.

For starters, the following table shows the ThinkPad 11e laptops with Windows and Chrome OS that Lenovo plans to replace next month. There’s really no difference between the “vanilla” clamshell models and the convertible “Yoga” units save for the obvious screen flexibility with the Yoga models, and the added Windows 7 Pro option for the clamshell models.

As for what the new ThinkPad 11e and ThinkPad Yoga 11e models will provide, here is what Lenovo offers in the details department:

Next, we have the upcoming N23 Chromebooks that will be served up in traditional clamshell and convertible “Yoga” flavors. Lenovo said the N23 Yoga Chromebook will be the company’s very first Chromebook with an ARM-based processor. That means the device will be optimized for Android apps sold in the Google Play Store even though all Chromebooks launching in 2017 and thereafter will work just fine with Android apps.

“Simple to set-up and manage, both N23 Chromebooks offer students a personalized user experience simply by signing in with their Google Chrome ID while teachers and IT administrators have peace of mind and ultimate flexibility with a web-based management console,” Lenovo said.

Here are the N23 Chromebook highlights:

Finally, we have the Lenovo N24 convertible notebook based on Windows 10. Given it won’t be made available until sometime around this summer, the company revealed very little about its details. However, what we know is that it will sport an 11.6-inch IPS screen that can rotate a full 360 degrees. This screen will support 10-point touch input and Lenovo’s Active Pen when the Lenovo N24 arrives later this year.