Robots could get soft, stretchable skin that changes colors 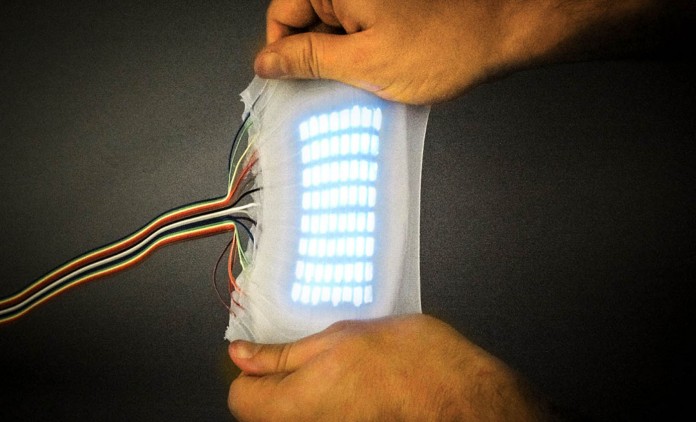 Researchers from Cornell University have developed a potential skin material that lights up and stretches to more than six times its original size. The so-called hyper-elastic, light-emitting capacitors (HLECs) are made from transparent hydrogel electrodes wrapped around an insulating dielectric sheet, allowing them to light up when stretched or rolled. Since the skin can handle twice as much strain as earlier materials, it could function as a skin for soft robots that light up to display “emotions.”

“We can take these pixels that change color and put them on these robots, and now we have the ability to change their color,” says lead researcher Rob Shepherd. “Why is that important? For one thing, when robots become more and more a part of our lives, the ability for them to have emotional connection with us will be important. So to be able to change their color in response to mood or the tone of the room we believe is going to be important for human-robot interactions.”

Another possible use for the material is in wearables, perhaps in conjunction with stretchable circuits. “You could be in a meeting and have a rubber band-like device on your arm and could be checking your email. That’s obviously in the future, but that’s the direction we’re looking in,” says researcher Chris Larson.

However, they also compared it to the skin of an octopus, saying the animal has “pigments that enable rapid and detailed camouflaging abilities.” Since their work is also supported by an Army Research office grant, we know what that means. When the robot revolution comes, the hunter droids will be able to use their stretchable, camouflaging skin to hide themselves in plain sight.

Facebook
Twitter
Pinterest
WhatsApp
Previous articleEpic Games: Microsoft can’t be allowed to control PC gaming
Next articleThe Honor 5X can be had for £150 at Clove for a limited time