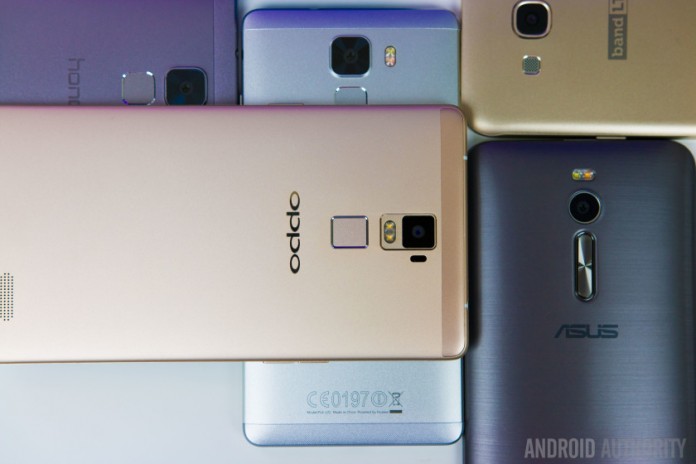 In recent years, smartphones have effectively replaced point-and-shoot cameras, and many have even outperformed them. For many of us, these portable computers have even become our main camera, making photo quality a priority when picking a new smartphone.

Are you looking to get a new phone? In this post we put together a list of the very best camera phones out there. These are all stunning performers, but there are different factors that put them on this list. Some are better in some ways, but not in others. Let’s just go through the list and find out which one is the right one for you!

Shall we start with Google’s very own Nexus 6P? Listing a Nexus phone here is definitely refreshing, as these devices are usually not known for their camera prowess. But this time around Google and its partner have really outdone themselves, and many argue that the Nexus 6P has the best Android smartphone camera currently on the market.

The Nexus 6P features a 12.3 MP sensor, and the old “megapixels don’t matter” saying certainly applies here. Instead of making images larger, the Nexus 6P takes advantage of 1.55 µm pixels. Pixels are larger and let in more light, making for faster shutter speeds, crisper images and vibrant colors. And optics are equally important, which is why the Nexus 6P sports an f/2.0 aperture.

In addition to being a great camera phone, the Nexus 6P also packs high-end specs that make the entire phone experience an epic one, and is easily one of the best flagships in the smartphone world.

While the Nexus 5X is more affordable and is made by a whole other manufacturer (LG, as opposed to Huawei), it actually sports the very same 12.3 MP sensor we see in the Nexus 6P. Google didn’t skimp out on photography this time around. There are a few minor differences in terms of camera performance, but this is still a great choice. As for the rest of the specs? It’s not nearly as impressive as the 6P, but the mid-range package is more than enough to provide a solid Android experience for most users.

When it comes to smartphone photography, Samsung is definitely a manufacturer we can’t ignore. The Korean giant keeps pushing the barriers of mobile photography with industry-leading handsets. The Samsung Galaxy S6 Edge+ comes with the same 16 MP sensor and f/1.9 aperture we saw on the regular Galaxy S6. It also features OIS (optical image stabilization).

It may no longer be considered “the best camera in mobile”, but it was for a while, and it continues to be one of the best around. Your images will look gorgeous if you use this bad boy, and you’ll be backed up by equally high-end specs.

Don’t like those edges? No problem. Just move over to the Samsung Galaxy Note 5 and you will get your large handset with the same gorgeous camera, and the added benefits of the S-Pen. For photography, productivity, or even just gaming, there’s few handsets that compete in the same league as the Note 5.

The LG G4 was known to have one of the best smartphone cameras in 2015, so it’s no surprise that the V10 continues this tradition. In fact, they both have the same 16 MP sensor with an f/1.8 aperture. The main difference is that the newer LG V10 includes more editing features for both imaging and video. And just like the LG G4, it does have laser autofocus for super quick focusing.

On the front side things are a little more different though. The LG V10 comes with dual 5 MP front-facing cameras that captures wider angles in order to better include all your friends in those casual selfies. While it might not have the highest end Qualcomm chip available, make no mistake, this phone is a premium flagship both in terms of the camera and its general performance.

While the LG V10 camera is amazing, the LG G4’s is just as good. The main difference here is that the LG G4 is not nearly as large. It’s still a big smartphone, but much more manageable. And it also comes with great specs and high-end performance. In addition, you can enjoy an 8 MP front-facing shooter that will make for slightly bigger images.

The LG G4 has been met with somewhat mixed reception, though it is still easily one of the best phones out there for those looking for a good camera experience at a decent price.

Sony doesn’t quite get the reputation it deserves when it comes to smartphone cameras. They make their own sensors and actually sell plenty of them to other phone makers, so there’s a high chance you use a Sony camera right now. The Japanese manufacturer’s Exmor technology is one of the best in the industry and it’s no surprise to see them go all out with their very own flagship smartphones.

The Sony Xperia Z5 features a powerful 23 MP Exmor RS sensor. But what good is a great sensor if you can’t get yourself to capture the moment in time? This is why Sony is loyal to their dedicated camera buttons, making it silly easy to access the camera. In addition, you won’t be wasting time focusing, as the Xperia Z5 comes with Hybrid AF technology. This translates to 0.03-second focus times! And let’s not forget that 5x Clear Image Zoom, which allows you to zoom in without losing quality.

For those looking for high-end performance outside of just the camera, the Z5 should do wonderfully here as well.

OnePlus isn’t very well known for camera quality, but the OnePlus 2 actually sports a pretty darn good shooter. What makes it special is the 13 MP sensor with 1.3µm pixels, which are relatively bigger than those found in other phones. In addition, that f/2.0 aperture will make shutter speeds faster and images crisper. And the phone is also aided by laser autofocus and a dual-LED flash.

That’s a remarkable camera for a phone that costs under $400. Equally great is the fact that you get a Snapdragon 810 and all the high-end performance you’d expect from a more expensive Android flagship.

Motorola is another manufacturer not commonly known for mobile photography, but they have made some changes with the Moto X Style (otherwise known as Pure Edition). 2015 was a good year for mid-range smartphones, at least in the camera department. The Moto X Style comes with a 21 MP Sony IMX 230 sensor and an f/2.0 aperture. This does make for some great shots that competes with the best of the best.

Most of these phones have good front-facing cameras, but none of them are outstanding. This industry focuses mostly on back cameras, which tends to make sense, but we know some of you love those selfies. This is why we wanted to include a phone that specifically excels in this department.

The HTC Desire Eye features the same 13 MP in the front and back. And there is even a dual-LED flash adorning the front of the device, meaning you will never take dark or grainy selfies again. Oh, and let’s not forget it is one of the most affordable handsets in this list.

As for performance? While the Snapdragon 801 isn’t going to win any awards, it’s still a decent processor and should provide a pretty solid Android experience for all but the most hardcore Android fans.

So there you have it, guys. Those are our top 10 smartphone cameras. The picture will be looking good with any of these, though some better than others. Check out our reviews to learn more about these gadgets and make the best decision for your own needs. And don’t forget to hit the comments and tell us which is your favorite!

How to view your match results and statistics in PUBG Mobile