Lucky entrants into Sony’s Marshmallow concept build program first managed to lay their hands on the beta operating system, which is based on stock Android, last week. Today, Sony has begun rolling out its first OTA update for the group. 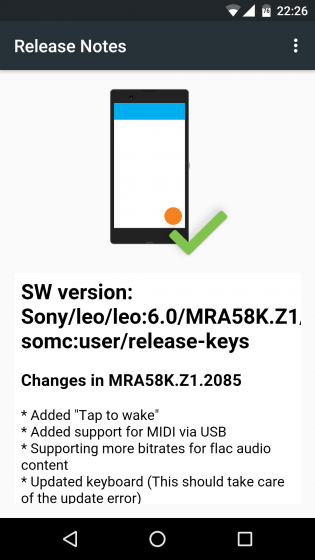 The updated build is numbered MRA58K.Z1.2085 and contains a selection of new features. Tap to wake is now supported, as its MIDI via USB and a new updated keyboard. The OS now also supports higher bit-rate FLAC audio content, which will please the audiophiles out there.

Currently, the Marshmallow Android Concept program is only available to a select number of Xperia Z3 (D6603) and Z3 Compact (D6603) smartphone owners in the following European countries: Denmark, Estonia, Finland, Germany, Iceland, Ireland, Latvia, Lithuania, Norway, Sweden and the United Kingdom. Sony hasn’t suggested if or when more countries will be able to join the program, but you can always check out Sony’s app from the Google Play Store to try your luck for an entry ticket into the group.

The update should be hitting devices in the program within the next few days.

Facebook
Twitter
Pinterest
WhatsApp
Previous articleFeature Focus: up close with Sony Xperia Z5’s camera
Next article[Deal] Get in shape and stay in shape with FitApp Premium for FREE