HomeNewsSega's created the projection-mapped kids' sandbox of the future
News

Sega’s created the projection-mapped kids’ sandbox of the future 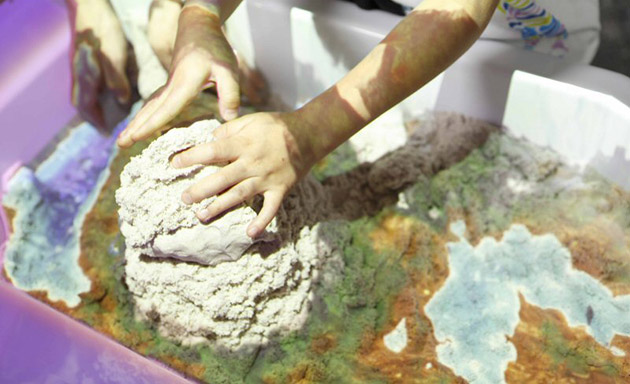 If grown-ups can have flashier, fancier toys as the years go by, so can kids. Sega’s latest games machine is set to appear in arcades as well as in the waiting rooms of car dealerships and real estate offices. It’s not any kind of video game, though — it’s an interactive sandbox that projects images based on what players are building with its non-sticky sand. Sega calls it “Eederu Sunaba” or Picture Appears! Sandbox (a loose translation, but hey), and it’s equipped with sensors that can determine the height differences on the surface of the sand, along with a projector to make the magic happen. If a kid (or an adult — no judgment here) piles up sand to make a hill, the projector beams an image that makes it look like it’s covered in grass, or even in snow if the hill’s tall enough to be a mountain.

Trenches, on the other hand, are filled with digital water, complete with swimming schools of fish, though the system can also project insects like ladybugs and butterflies instead. These virtual organisms can even detect if you’re trying to touch (or squish) them. Definitely beats trying to craft a sandcastle in the playground and coming up with something that looks like a mound of dirt, doesn’t it? If you don’t live in Japan, you can ask those University of West Bohemia students how they created their Kinect sandbox (that’s very similar to this one) back in 2011. Or, you can just watch the video below and live vicariously through those happy Japanese kids.