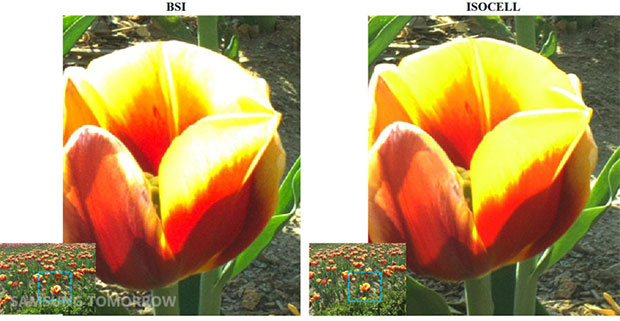 Samsung’s offering up spoilers at what we can expect from future Galaxy smartphones — already. They will likely feature ISOCELL, the company’s new CMOS imaging sensor. It adds “advanced pixel technology” that polices the absorption of electrons for improved color fidelity, even when lighting isn’t ideal. The new sensor will head to new “premium” smartphones and tablets, with mass production scheduled to start in Q4 2013. Samsung’s ISOCELL tech improves on current BSI (back-side illuminated) sensors by adding a “physical barrier between neighboring pixel”. The science behind it means that more photons can be collected and that’s what will improve image quality. This between-pixel crosstalk is apparently reduced by 30 percent, and increases the dynamic range of photos by up to 30 percent — as you’ll note from the washed-out petal tips in the sample above.

Samsung explains that “market pressure” has meant it had to increase camera resolution and image quality, without increasing the size of the camera unit. This meant that pixels had to shrink, “while improving their performance at the same time”. Interestingly, this sensor is specifically for 8-megapixel units, which could mean a drop down from the 13-megapixel camera seen in the Galaxy S 4. A full camera unit housing ISOCELL would also take up less space inside devices compared to previous imaging sensors, with a reduced height that sounds like it could be ideal for the company’s future high-powered, even thinner smartphones.