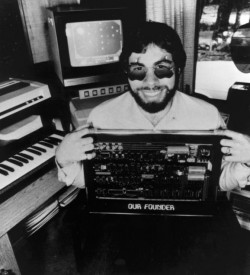 Apple co-founder Steve Wozniak said in an interview yesterday that Apple has fallen somewhat behind in the smartphone field, allowing competitors like Samsung to catch up.

The comment was made as Wozniak spoke about the importance of brand (translated from the original German report by wiwo.de) at the Business Week Best Brand Awards.

I am proud that we have such loyal fans. But this loyalty is not given, the need to have the best products is always there. Currently we are in my opinion somewhat behind with features in the smartphone business. Others have caught up. Samsung is a big competitor. But precisely because they are currently making great products.

The comments were, however, made in the context of his great pride in Apple and its products. Wozniak also explained why he stands in line at Apple stores to buy new products on launch days despite remaining an employee of the company to this day.

The launch of a new Apple product is for me like a big, major concert which you absolutely must attend personally. It’s history. Sure, I could order online or call the store manager so that they smuggled me in the back door. But that would be nothing. No, I will have the experience like any normal customer. But one thing is certain. If Apple made lousy products, I would not be in line.

Wozniak has never been shy in speaking about Apple, and while he has only very limited contact with the company today, he still draws significant attention at his appearances at events at Apple product launches. While he remains a fan of Apple and the iPhone, he has long been open to alternatives and has noted several times that he carries a number of iPhones and Android devices with him.

(Thanks, Chris! Photo from woz.org.)