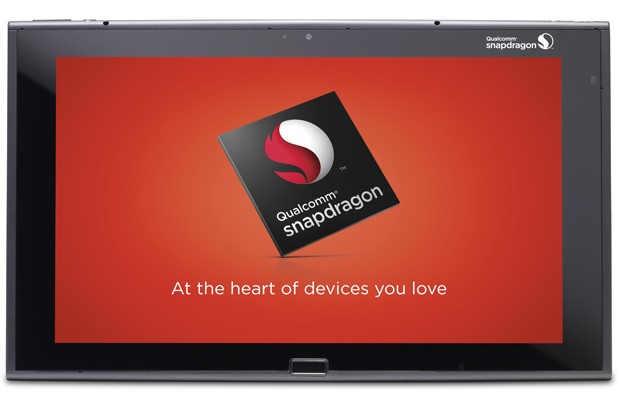 Qualcomm didn’t show all its cards for this year when it unveiled the Snapdragon 600 and 800 at CES. The company is introducing a second-generation power charging technology, Quick Charge 2.0, that promises to cut mobile device charging times by as much as 75 percent versus regular power systems. Qualcomm has seen a tablet’s 7-hour top-up time reduced to under 3 hours. While 2.0 requires an optimized charger and is baked into the Snapdragon 800, it’s not exclusive to Qualcomm-based hardware — or small devices, for that matter. The updated Quick Charge is available as a stand-alone circuit, and could drive even laptops demanding up to 60W of energy. We don’t yet know the customer list, although Snapdragon 800 partners are included as a matter of course.

The telecom giant is saving one trick for itself, however. Snapdragon Voice Activation lets Snapdragon 800-based devices wake up through a specific voice command, whether or not those devices are online: think of it as a more advanced, less search-dependent parallel to Samsung’s wake-up trigger in S Voice. Both devices and software support must fall into place to make Voice Activation work, but truly hands-free mobile control could have a solid footing in the market before the year is over.

You can’t go mobile if you’re stuck plugged into an outlet waiting for your smartphone or tablet to charge. Last year, over 70 devices launched with Qualcomm Quick Charge 1.0, an in-device solution that enables smartphones and tablets to charge up to 40% faster. Today we’re introducing the next generation, Qualcomm Quick Charge 2.0, a solution that resides in both the device (offered as a standalone IC solution or as part of the PMIC power management integrated circuit of Snapdragon[TM] 800 processors) and in the AC/DC wall charger. It’s even faster and more flexible than Quick Charge 1.0, and will be inside smartphones and tablets powered by Snapdragon 800 processors.

Quick Charge 2.0 will soon be built into standard micro-USB AC/DC wall chargers, so these chargers won’t look or operate differently and will be widely available. In fact, Qualcomm is already working with leading AC/DC chipset suppliers and their AC/DC power supply partners to fully enable the power supply ecosystem.

We anticipate that devices and wall chargers with Quick Charge 2.0 will be available for purchase by early 2014; all smartphones and tablets with a Qualcomm Snapdragon 800 processor will have Quick Charge 2.0. Snapdragon 800 processors are an entire system-on-a-chip and feature a CPU, GPU, DSP, LTE Modem and much more, enabling UltraHD video, high-end 3D gaming, 7.1 surround sound, and up to 55 Megapixel image captures, so being able to quick charge means less time charging and more time doing!

Snapdragon[TM] wakes up the mobile world with Snapdragon Voice Activation

That said, we’re always keen to save a few surprises for later. If you’re wondering what more we could add to the Snapdragon 800 package, we’ve got two words for you: “Voice Activation”

Today, we’re pleased to introduce Snapdragon Voice Activation, the world’s first integrated always-on, low-power listening feature. Snapdragon Voice Activation, a new addition to the Qualcomm Fluence[TM] PRO suite of integrated audio solutions, enables devices powered by Snapdragon 800 processors to be “woken up” by a custom voice command (beginning with a custom phrase set by the device OEM like “Hey Snapdragon”, for example) and respond without even a single key press. After recognizing a custom word or phrase, Voice Activation wakes the Snapdragon-based device, even if it had been in standby or airplane mode, and connects to the OEM’s/HLOS voice natural user interface.

Snapdragon Voice Activation is designed to be a low-power and secure solution. It enables devices to use the least amount of power possible to listen only for the custom word set by the OEM and spoken by only the voice of the device owner, enabling both a secure and power efficient solution for users.

All of this is made possible through the advanced, tightly integrated hardware and software in Snapdragon 800 processors. And with over 55 Snapdragon 800-powered devices already in development, smartphones and tablets everywhere will be waking up to their owners’ command when they are available in the second half of 2013. We’ve long promoted the idea of mobile devices evolving into a digital sixth sense, and today, more than ever, we are seeing these big ideas become reality.