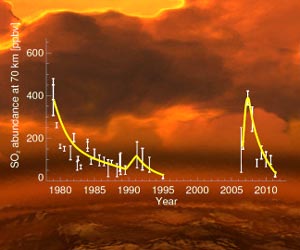 It’s very difficult for scientists and astronomers to directly study surface features on the planet Venus because of the thick cloud cover. That thick layer of clouds blocks satellites and telescopes from directly imaging the surface of the planet as satellites are able to do here on Earth. For decades scientists and astronomers have wondered whether or not Venus could have active volcanoes on its the surface.

Wind speeds on the planet reach hurricane force near the top of the clouds circumventing the planet in only four days. This process is known as super-rotation. Scientists also know that the atmosphere is rich in carbon dioxide and is 90 times denser than the atmosphere on Earth. The thick layer of clouds and the dense atmosphere pushes the surface temperature on Venus to about 460°C.

In the past, radar imagery has shown over 1000 volcanic structures and evidence of resurfacing of the planet periodically by large quantities of lava. The latest evidence of volcanic activity on Venus comes courtesy of the Venus Express SPICAV-UV spectrometer. This instrument discovered an unusual change in the quantity of sulfur dioxide in the upper atmosphere.

Increase in sulfur dioxide gas hints at active volcanoes on Venus is written by SlashGear.
© 2005 – 2012, SlashGear. All right reserved.