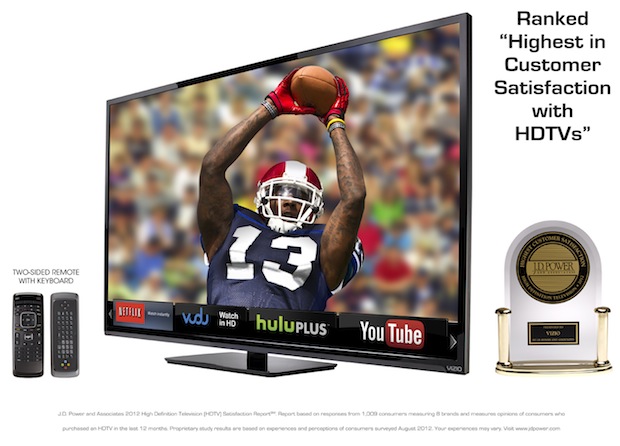 While Vizio’s summer has been all about PCs, set-top Google TV boxes and even the odd ultrawidescreen HDTV, it’s getting back into its usual garb for the fall. As is its customs, it’s rolling out a few new HDTV models ahead of the big shopping season, which range in size from 55- to 70-inches. Other than the 58-inch CinemaWide ultra widescreen model there are also three representatives from its M-Series, with a 55-inch model for $949, and a 65-inch model that’s $1,699 with 3D and $1,499 without. The other two models are in its E-Series line, and are 2D only edge-lit LED sets that feature a new thin bezel / slim frame design. The 60-inch version is priced at $999, while the 70-inch goes for $1,999. They all include the Yahoo Widgets powered Vizio Internet Apps (Netflix, Vudu, Hulu, Amazon etc.) and WiFi built in and most are already popping up on store shelves near you (just ask Logitech and Sling how that works), check out a bit more information in the press release after the break.