Backup. It’s more often than not the guilty omission in homes and small offices, and the hassle of setup – finding a place to plug in for both power and network – is often cited as a key hurdle. Synology wants to change all that with the DiskStation DS213air, the company’s first WiFi-equipped NAS: up to 8TB of storage, all the media streaming a modern home might demand, and in a small and affordable footprint. Does wireless overcome that big barrier to backup? Read on for our full review. 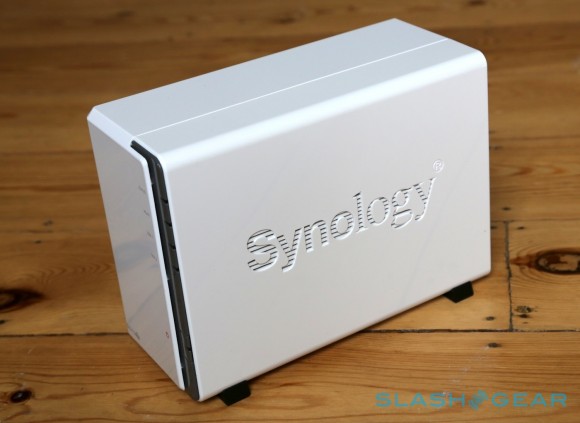 Synology hardware is generally subtle and solid, and the DS213air is no different. 165 x 100 x 225.5 mm of glossy white plastic standing on four black rubber feet, it’s discrete if relatively uninspiring. Sticker price is $299.99, though Synology’s choice of plastics seems a little cheaper than some of its more expensive models. Not so bad as to leave us worried as to its durability, however. 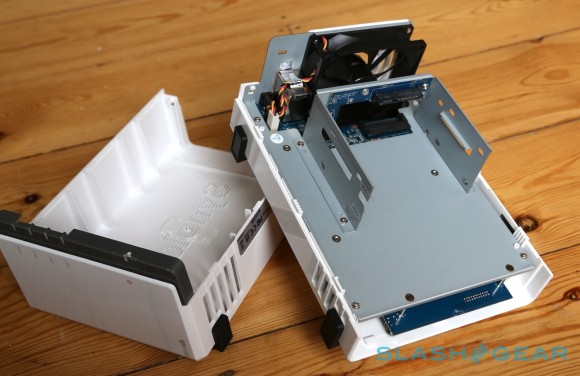 The lower cost also likely explains the absence of slick drive caddies, with Synology instead requiring users open up the casing in order to access the two internal bays. The two halves of the NAS slide apart, leaving plenty of room to access the SATA II slots (which will accommodate either 2.5- or 3.5-inch drives, of up to 4TB apiece); you can optionally secure it together with included screws.

In addition to the internal bays, there are two USB 3.0 ports for hooking up external drives or printers for network sharing. There’s also a gigabit ethernet port, while inside there’s a WiFi b/g/n radio, though only with support for the 2.4GHz band, not the often-faster 5GHz band. It would’ve been nice to have seen WiFi ac support too, though that’s yet to be ratified and probably at odds with the DS213air’s budget tag; the first breed of WiFi ac routers generally cost two-thirds of the NAS alone, for instance. 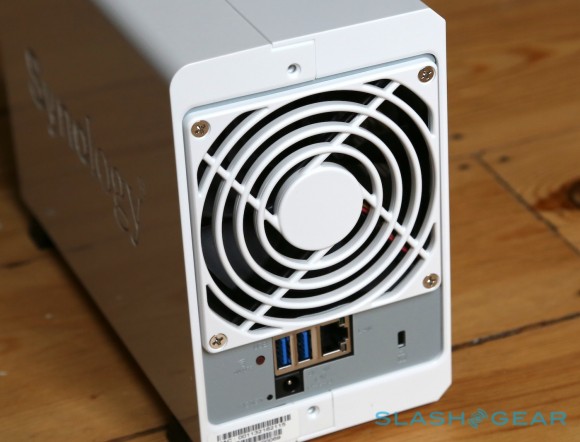 At the back, there’s a 92mm fan which, even when the DS213air was under load, was generally quiet though spins with a noticeably higher-pitched tone when under load. You could have the NAS in your lounge and probably not notice it with the TV on. Up front there are LEDs to show status, WiFi activity, drive activity for each HDD, and a power light integrated into the power button. Unlike other models in Synology’s line-up, there’s no front USB port and quick-sync button, for quickly offloading photos from a digital camera.

Synology’s well-esteemed DSM 4.1 OS makes its expected appearance, running on a 1.6GHz processor with 256MB of RAM. It’s one of the best platforms for network devices, resembling a blend of Windows and OS X, and organizing the DS213air’s dozens of features into an approachable layout. 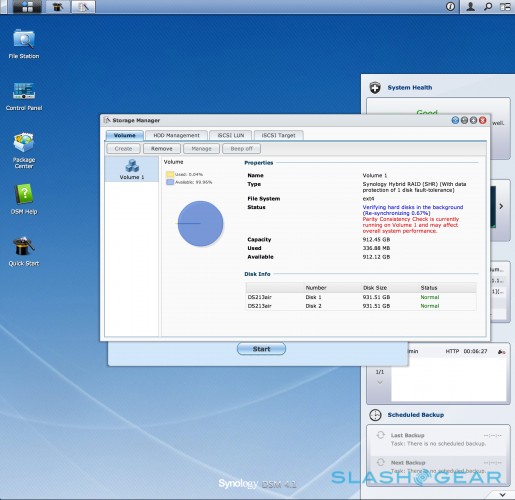 First step is setting up your drives, which can be done in various levels of RAID. There’s the choice of creating one big volume spanning both – though without any data redundancy, so if one drive dies you lose the whole volume – as well as mirroring data, which gets you the storage of a single drive but the security of having a second copy should one unexpectedly expire. Synology’s Hybrid RAID is offered as the default, as well as more traditional Basic, JBOD, RAID 0, and RAID 1 options, though with only two bays there’s less room for some of the more creative arrays of the company’s larger models.

If you’ve a network cable to hand, then plugging in as a wired connection is straightforward. Alternatively, the DS213air can scan for WiFi networks and connect that way. Even if you don’t use the WiFi to get the NAS online, it can be turned on as a hotspot to open up wireless internet access, useful if you’ve a deadspot in your house or office. Alternatively, the DS213air can be used as a full wireless router, complete with a NAT firewall for security. 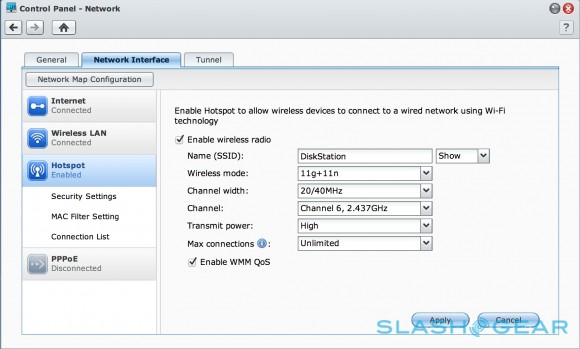 Beyond that, the NAS world is pretty much your oyster. The DS213air supports PC and Mac backup (including native Apple Time Machine support) with the option of different user accounts, multiple volumes, and per-account storage limits. You can drop your photos, videos, and music onto the drive, and have them shared out via DLNA/UPnP to your laptop, tablet, Xbox 360, PS3, or other device; Synology also offers iOS, Android, and Windows Phone apps for streaming media, as well as accessing files remotely. You can share two printers – using Apple AirPrint, Google Cloud Print, or regular old Windows printer sharing – and set up remote access for files or even host your email server or website.

Synology also allows for third-party functionality to be installed, including Logitech Media Server, hosting a WordPress blog, running a Plex Media Server, Asterix virtual PBX, and more. If you want cloud-based reassurance for your data, there’s support for HiDrive mirroring too, along with Symform cloud backup. You can even use the DS213air to monitor and record IP webcams as an impromptu security station. 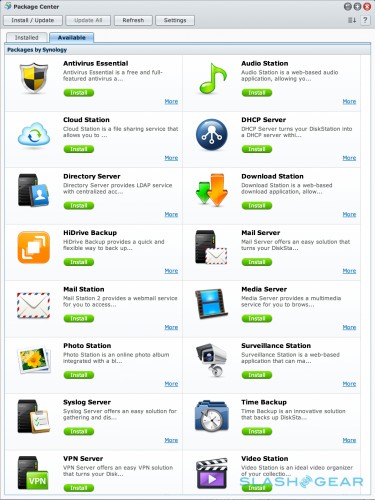 That could get intimidating, if it wasn’t for the relative simplicity of DSM 4.1. If you can navigate through your PC or Mac, you can figure your way through Synology’s system; the more complex features stay out of your way unless you actively want to use them.

We slotted in a pair of 1TB Western Digital WD1002FAEX Caviar Black 7,200rpm 3.5-inch drives and ran through Synology’s default setup, which creates a single volume with one drive failure tolerance under the company’s own Hybrid RAID (SHR) system. The whole setup process took around 10 minutes to reach the DSM 4.1 desktop – at which point we could begin setting up user accounts and other settings – with the RAID taking a further 8 minutes to establish (and then running a background verification check, during which we were able to copy data to the drive, albeit at slightly reduced speeds). After formatting we had 912.12GB of space: roughly the equivalent of a single drive. 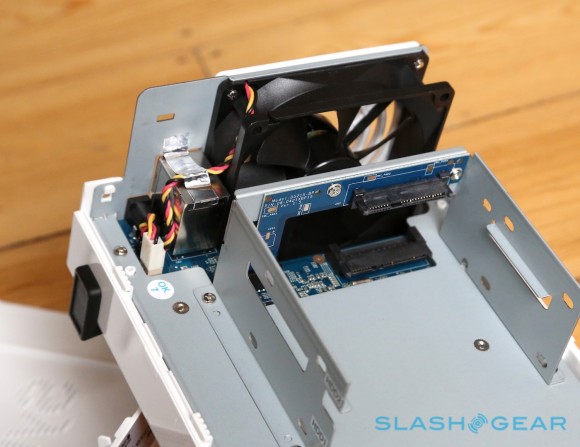 Synology suggests the DS213air is capable of 108.07 MB/sec read speeds with a RAID 1 array, and 58.66 MB/sec write speeds, based on transferring a single 5GB file over a wireless network. In a real-world environment, performance unsurprisingly takes a hit

Over a wired gigabit ethernet connection, we saw 83.08 MB/sec read rates and 32.4 MB/sec write rates. Switching to wireless, meanwhile, with a direct link between the DS213air and our test computer, those figures dropped to 9.82 MB/sec read and 8.34 MB/sec write.

More concerning, the DiskStation’s range proved a significant factor in speed drop-off. We achieved those wireless rates with DS213air and computer in the same room; with two walls between them, speeds fell to roughly a quarter of what we’d been seeing. Experiments with locking the NAS into 802.11n-only mode and switching channels had little effect, and there’s no 5GHz support. 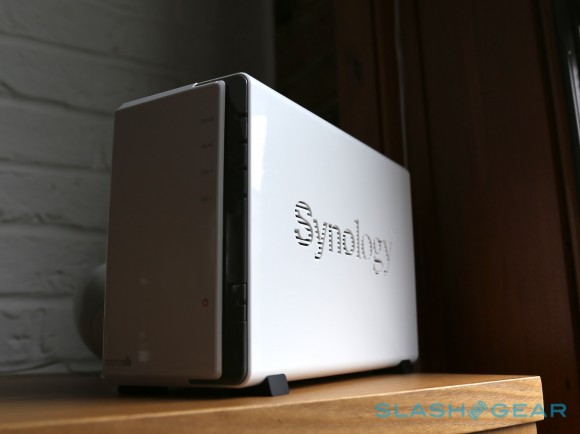 Convenience comes at a cost. As a standalone NAS with a traditional wired connection to your home or small office network, the DS213air performs much as we’ve come to expect from the budget end of Synology’s range. Wired speeds are solid though not outstanding, certainly sufficient for small scale backup and media streaming purposes, and the twin-drive capacity offers a balance between performance, redundancy and price.

Wireless, however, is a more mixed bag. Placing the DS213air is made significantly easier – all you need is power, rather than an ethernet cable – but there’s a cost in performance. Accessing the odd file or streaming music is fine, but it’s a painful experience if you’re doing large backups over WiFi. Synology could’ve addressed this, in part at least, if it had opted for a dual-band 2.4GHz/5GHz radio, as the 5GHz band is generally less congested, but that would have presumably added to the price of the NAS.

Being able to repurpose a NAS as a wireless router is useful, though those looking for the greatest flexibility in where they store their backup system are likely to find better results with a Powerline adapter rather than WiFi. The Synology DiskStation DS213air is capable for an affordable NAS, but WiFi is still not the panacea to cable-phobia.

Facebook
Twitter
Pinterest
WhatsApp
Previous articleNokia Lumia 920 to be a Rogers exclusive in Canada, we wonder if red is an option
Next article3M Streaming Projector teams with Roku for giant entertainment
- Advertisment -

Framework Laptop Chromebook Edition review: It doesn’t get better than this