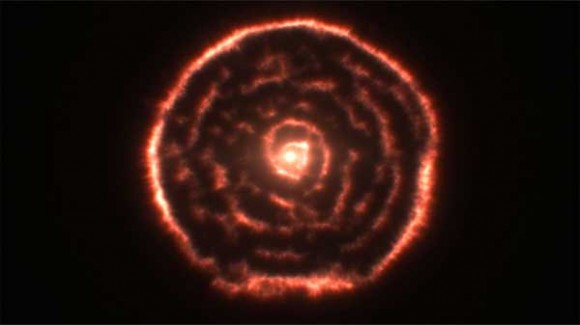 The particular red giant in question is about 1000 light-years from Earth, and the spiral structure was spotted in an envelope of gas and dust surrounding the star. The astronomers believe that the spiral object was created from the gases that are expelled by the dying red giant star. Details about the velocity of winds blowing off R Sculptoris show that the star has expelled about three times as much of its mass as previously estimated.

Astronomers estimate from studying the spiraling expulsions from R Sculptoris that the star was shedding more mass during its thermal pulses than previously believed. The spiral formation was caused by a companion star to the red giant pushing through the layers expelled from its surface. The researchers say that elements of the spiral that were blown from the stars surface at higher velocities are more widely separated spirals.

On the other hand, the parts of the spiral there were blown off at slower speeds are more tightly packed. The intensity of the spiral shows how much mass was blown from the star in each pulse. Astronomers say that R Sculptoris is typical red giant star, and its evolution could provide a hint at what will happen to our sun in about 5 billion years.

Spiral star structure gives clues about the end of our sun’s life is written by SlashGear.
© 2005 – 2012, SlashGear. All right reserved.

Is 5G dangerous for airplanes? Here’s what pilots and the FAA say