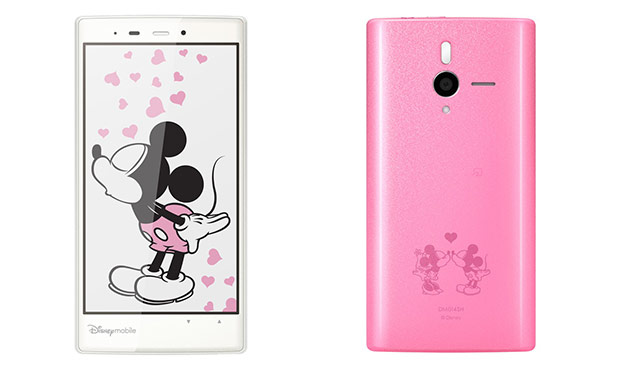 Softbank unveiled a bevy of new phones for its winter and spring lineup, and among the raft of new hardware is a Disney Mobile Android handset. Clad with a white or pink back, the smartphone’s rear is emblazoned with the smooching likenesses of Mickey and Minnie Mouse, who also make an appearance on live wallpaper. A cutesy motif may pervade the cellphone, but its specs are a sign that the mice can hold their own. The waterproof device packs LTE connectivity, a 4.5-inch display (1280 x 720), 1.5GHz dual-core processor, 13-megapixel camera, 8GB of built-in storage and a microSD expansion slot. Currently, the phone runs on Ice Cream Sandwich, but an update to Jelly Bean is coming down the pike. Unfortunately for avid Mouseketeers in other territories, the mobile is only slated for a launch in the Land of the Rising Sun.

Softbank unveils Disney-themed Android handset in pink and white originally appeared on Engadget on Wed, 10 Oct 2012 02:37:00 EDT. Please see our terms for use of feeds.