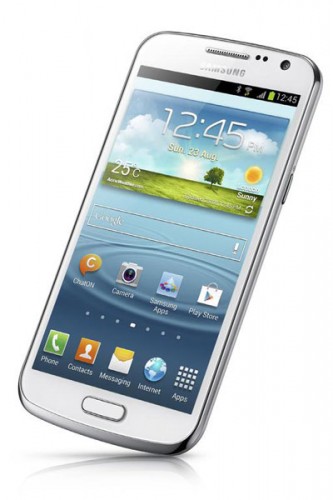 Samsung‘s upcoming Galaxy Premier I9260 smartphone has been appearing all over the Internet lately, with images cropping up showing off a Galaxy S III-like design and hinting at soon-to-be-announced availability. As it were, that time has come, with Samsung officially announcing the LTE handset, and the Ukraine being one of the first places it will land. The device is slated for release next month.

The Samsung Premier I9260 features a 4.65-inch AMOLED display with resolution of 720 x 1280. Inside you’ll find a dual-core 1.5GHz TI OMAP 4470 processor, 1GB of RAM, and 8 or 16GB of internal storage space, depending on model. There’s a microSD card slot that supports expansion up to 32GB. There are two cameras, an 8-megapixel rear camera and a 1.9-megapixel front camera. The device supports LTE and has a 2,100mAh battery.

The Premier will be launched next month, arriving in the Ukraine in December. Although more details on pricing and availability aren’t available, we do know that it’ll be priced at 5,555UAH in the Ukraine, which is about $680USD. Recently, the device appeared on a Chinese billboard advertisement alongside several other Samsung phones, including the Galaxy S III.