Images and specifications of Samsung’s new Galaxy S III Mini, expected to be officially unveiled in Germany tomorrow, have leaked, and it’s not quite the powerhouse we had hoped for. According to MobileGeeks, the 4-inch S3 Mini (GT-I8190) will have a WVGA 800 x 480 Super AMOLED display and a 1.GHz dualcore STE U8420 processor, with a 5-megapixel camera on the back. OS is Android 4.1 Jelly Bean complete with Samsung’s own TouchWiz. 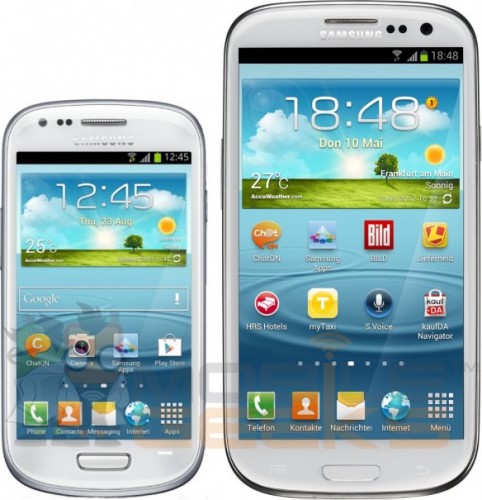 Other tidbits include NFC for mobile payments and Android Beam, a 3.5mm headset, a 1,500 mAh battery, VGA-resolution front facing camera, and – going by the leaked images – a change to the touch-button design, with simple illuminated lines rather than full graphics as on the Galaxy S III. The whole handset is tipped to measure in at 121.55 x 62.95 x 9.85 mm, making it considerably smaller than the Samsung flagship.

According to the German site – which admits that some of the specs may not be 100-percent accurate, based on collating evidence from a number of sources – the phone will go on sale at €399 ($513) unlocked and SIM-free. It’s certainly not quite the flagship-but-smaller device we had hoped for, but it ticks more of the boxes than most 4-inch models around.