If you thought the Angry Birds series couldn’t possibly get any better than the last installment, Angry Birds Space, you might be in for a big surprise. Rovio just teased an image that hints at a possible Star Wars-themed Angry Birds sequel, complete with an animated GIF that shows off the iconic light saber. 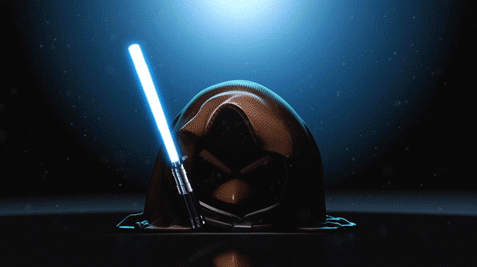 Rovio first tweeted an extremely vague image and simply said to “check back tomorrow for a hint!”. Obviously, we had no clue what the image was, other than that it was most likely one of the Angry Birds covered in a robe of some sort, but that could’ve pointed to a number of different possibilities.

However, Rovio later tweeted a link to their official Angry Birds Tumblr blog where they posted an animated version of the original image. This time, it gives it all away thanks to the glowing light saber and the light that gets casted on the face of the Angry Bird. The Tumbler page says to head to Times Square in New York City on October 8 at 10am EST, and also to head to a Toys R Us at 8am EST that same day we’re guessing.

We’re not exactly sure what Times Square and Toys R Us will have in store as far as an Angry Birds sequel announcement. Our guess is that Rovio will have a launch trailer playing in Times Square on one of the big screens, while Toys R Us might possibly have collectible Star Wars-themed Angry Birds plush toys go on sale on launch day. Then again, we’ll just have to wait and find out on Monday.