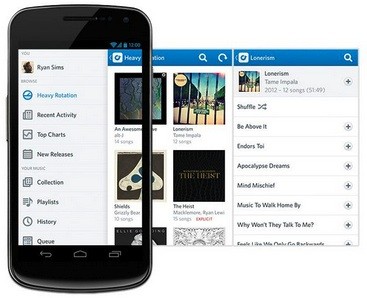 Rdio has spent a large part of 2012 revamping its mobile app, and a new beta shows that it’s still full of ideas with two months left to go. The 2.3 test version makes the ubiquitous hidden sidebar even more unavoidable than we’ve seen before, but those not irked by UI homogeneity will be happy to see Rdio gain some multi-device harmony: along with syncing whatever’s being played from desktop to mobile and back, the beta introduces a remote control that lets Android gear either serve as the remote or as a target for other devices. A play-later queue persists across devices, too. Although we haven’t been given a timeframe for the finished version pushing out through Google Play, there’s nothing stopping avid subscribers from taking a slight risk with the beta and getting a taste of their musical future.