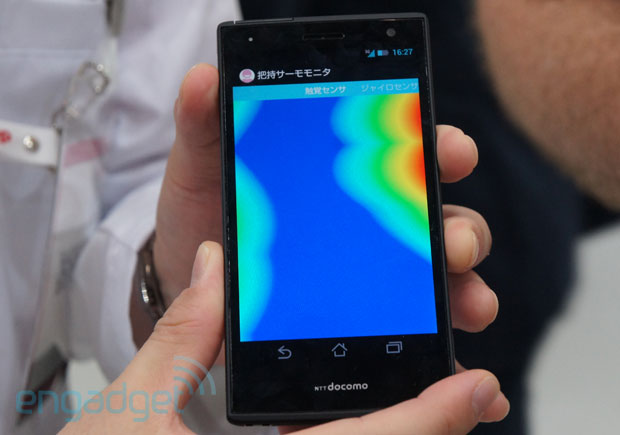 Maintaining your balance on a packed train while trying to handle the big-screened smartphones of today is often a tough challenge. At least NTT DoCoMo thinks so, offering up a new interface to avoid such issues — and throw in some extra gesture shortcuts. Gesture UI is a combination hardware-software prototype that the Japanese carrier is showing at this year’s CEATEC showcase in Japan. Consisting of a trio of grip sensors located along the two edges and across the back of the prototype phone, these can each detect up to five levels of pressure from your hand, as well as detecting how you’re holding the device.

This data is then channeled into the user interface, which allows the user to customize what the device does under certain conditions. We saw demonstrations of grip “shortcuts” to send you back to the homescreen, while holding certain portions of the sides would launched pre-assigned apps — pinching at the top of this device launched the internet browser. Once inside the browser, the Grip UI also allows the user to transfer across to other programs without returning to the aforementioned homescreen, using a combination of gripping and swiping across the display. We get a handle on the prototype UI inside DoCoMo’s imaginary train right after the break.