Moog shows off LEV-96 sensoriactuator prototype on an acoustic guitar 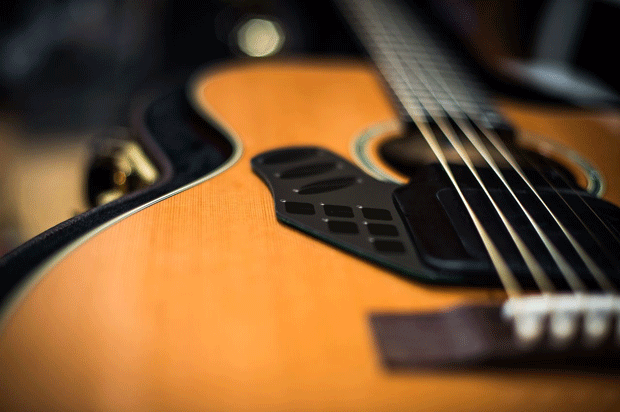 Moogfest isn’t happening for another week, but the synth-maker couldn’t wait to take the wraps off of its latest bit of technology. Still in the early days of beta-testing ,the LEV-96 is a far cry from the classic analog instruments we’ve come to associate with Moog. The company is showing off the sensoriactuator in its early stages by affixing it to a guitar, with two pickup channels beneath each of the acoustic’s strings. The strings’ vibrations trigger the sound, with the device “bring[ing] out hidden modes of vibration that have always been there, but were never energized in a direct manner,” according to the company — in all, the system is capable of managing up to 96 simultaneous harmonics. On the LEV-96, you’ll find touch-based control sliders, which let the player adjust intensity, harmonics and note duration. Additional triggers let you change arpeggio presets and modulation (tremolo and random harmonics), while a lock button makes sure you don’t adjust anything by accident.

Moog is careful to point out that the LEV-96 we’re seeing (still being referred to as a “concept project”) is just the tip of the iceberg, and “could easily be affixed to any surface or material.” The company has promised to show the concept in action soon, including an appearance at Moogfest on October 26th and 27th in the company’s home of Asheville, North Carolina. For more info consult the source link below.

Moog shows off LEV-96 sensoriactuator prototype on an acoustic guitar originally appeared on Engadget on Fri, 19 Oct 2012 09:47:00 EDT. Please see our terms for use of feeds.