Yesterday, Microsoft officially unveiled their new products like Windows 8 and the new Surface tablet running Windows RT. President of the Windows and Windows Live Division Steven Sinofsky spoke about the company’s new products and how they deliver modern computing at a lower cost by no doubt bringing Apple into the equation. 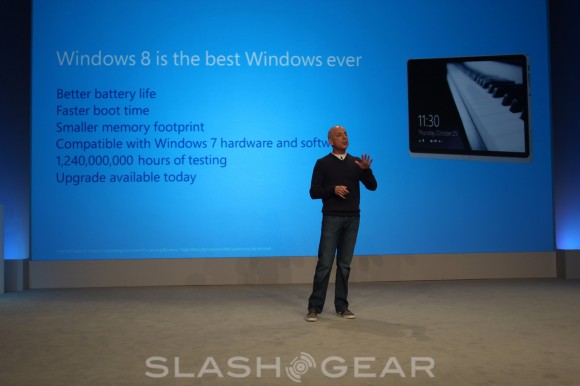 Sinofsky mentioned to AllThingsD that there are full-featured Windows 8 laptops that sell for as little as $279, which is less than what Sinofsky calls a “seven-inch recreational tablet” that sells for pricy $329. Sinofsky pointed out that he is very pleased with OEMs like Acer, Lenovo and Dell who have released thin and light touchscreen Ultrabooks that sell for much less than a MacBook Air.

However, he notes that these companies are “not just discounting” their products, but that it’s simply “engineering work that drives the cost down.” Sinofsky also says that the tablet-optimized Windows RT OS will hold a lot of appeal, and that the Surface tablet “really is a PC for everyone.”

Then again, Sinofsky asked, “Is it for everyone all the time?” His answer was no, but he said Microsoft’s Surface tablet will suffice during long business trips, and would outdo the iPad when it comes to long trips like that, since he mentioned that Apple’s tablet might only be good for shorter trips.

A signature Surface style and top-notch sound are the keys to Microsoft's latest cans. Here's our review.
Read more