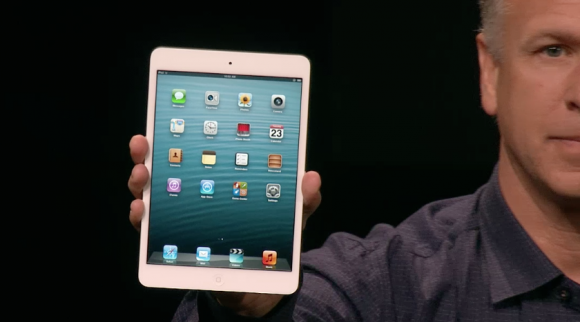 The iPad mini will come in black and white – and not just on the front. The front and back of the iPad mini will be colored, similar to the structure of the iPhone 5. The update for the ecosystem does not break down the developer universe, as it were, with the 9.7-inch display being reduced to a 7.9-inch display with the sam aspect ratio. The 768 by 1024 ratio of the iPad 2 has been replicated here as well, this allowing all apps ready for the iPad 2 to work right out of the box on the iPad mini.

This device has a back-facing camera at 5 megapixels and a front-facing camera that’s Facetime HD for high definition video chat. The iPad mini has been created to keep the functionality of the iPad, particularly in the app workability, and move forward with a 35% larger display area over – yes, you guessed it- the Nexus 7. Apple has decided to take on the Google Nexus 7 directly in the presentation this week with a full run-down of how the iPad mini is better. Expect a full run-down from us in the very near future.

Also get pumped for the pricing and release time and date for the iPad mini soon and very soon, stick around our Apple portal for all the best and the rest.