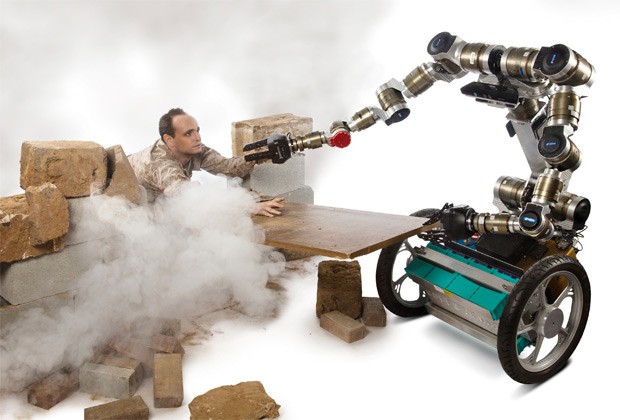 Robots come in many flavors. There’s the subservient kind, the virtual representative, the odd one with an artistic bent, and even robo-cattle. But, typically, they all hit the same roadblock: they can only do what they are programmed to do. Of course, there are those that posses some AI smarts, too, but Georgia Tech wants to take this to the next level, and build a ‘bot that can interact with its environment on the fly. The project hopes to give machines deployed in disaster situations the ability to find objects in their environment for use as tools, such as placing a chair to reach something high, or building bridges from debris. The idea builds on previous work where robots learned to moved objects out of their way, and developing an algorithm that allows them to identify items, and asses its usefulness as a tool. This would be backed up by some programming, to give the droids a basic understanding of rigid body mechanics, and how to construct motion plans. The Office of Navy Research’s interest comes from potential future applications, working side-by-side with military personnel out on missions, which along with iRobot 110, forms the early foundations for the cyber army of our childhood imaginations.

Georgia Tech receives $900,000 grant from Office of Naval Research to develop ‘MacGyver’ robot originally appeared on Engadget on Fri, 12 Oct 2012 10:59:00 EDT. Please see our terms for use of feeds.

The 5 best Apple deals in the October Prime Day sales

Amazon is selling the Pixel 6a for $329, and it’s just unbelievably good