HomeNewsForrester survey finds first ever decline in people 'using the internet,' but...
News

Forrester survey finds first ever decline in people ‘using the internet,’ but a changing notion of ‘being online’ 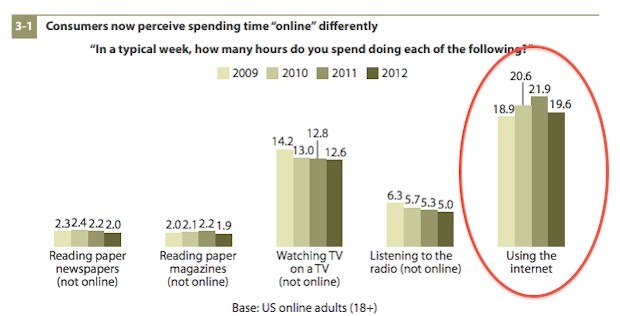 A survey measuring people’s internet use used to be a fairly simple thing. If you dialed up and logged onto CompuServe or AOL, you were “online” until you disconnected. Even in more recent years, you were “online” for as long as you were looking at a web browser or a chat window. But things have gotten more complicated as we’ve grown more mobile and connected than ever, and that’s now resulted in the first ever decline of people “using the internet” in Forrester’s annual survey since it began asking the question in 1997. As AllThingsD reports, this year’s survey found that people spent an average of 19.6 hours per week using the internet, compared to 21.9 hours in 2011. According to Forrester’s Gina Sverdlov, however, that’s not due to a shift back towards TV or other activities, but to a changing notion of what “being online” means to individuals. As she puts it, “given the various types of connected devices that US consumers own, many people are connected and logged on (automatically) at all times,” and that “the internet has become such a normal part of their lives that consumers don’t register that they are using the internet when they’re on Facebook, for example.” The full report isn’t available to the public, but you can find a few more details from it at the links below.

Forrester survey finds first ever decline in people ‘using the internet,’ but a changing notion of ‘being online’ originally appeared on Engadget on Wed, 17 Oct 2012 18:22:00 EDT. Please see our terms for use of feeds.