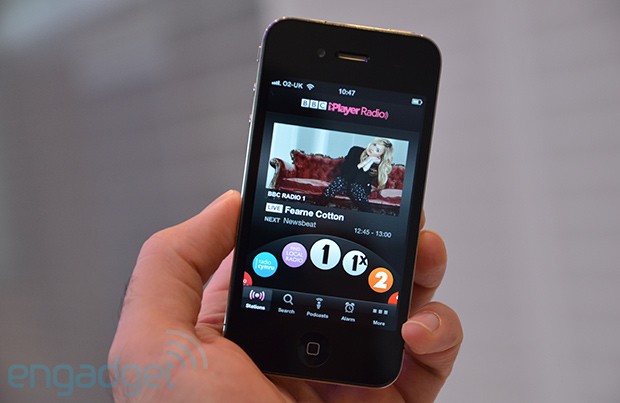 No one can accuse the BBC of neglecting radio in its quest for streaming nirvana — not when the number of radio listeners on iPlayer has shot up 56 percent in a year (and 300 percent on tablets). Nevertheless, from tomorrow morning, iPhone users will find a brand new way to listen to their favorite content: a dedicated radio app with a spinning dial which — compared to the regular iPlayer app — will put much greater emphasis on live shows rather than catch-up. There’ll also be mobile-friendly features like an alarm clock which will wake you up to your choice of show, reminders for shows you just can’t miss, and the ability to identify current and recently-played songs at a glance. The app will reach Android too, as soon as some Flash-related difficulties have been ironed out, and its alarm function will benefit from slightly better multi-tasking on Google’s OS, so you won’t have to leave the app open before you fall asleep. If you don’t want to wait or if you’re outside the UK, check out the desktop iPlayer at the source link, or the gallery below, and you’ll see just what the Corporation’s philosophy about treating radio differently — rather than as “TV minus video” — actually looks like.